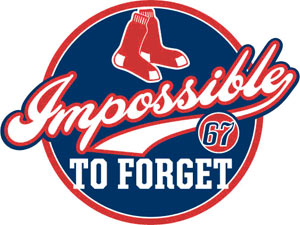 Last night at Professor Thom's, we had the viewing of the "Impossible To Forget: The Story of the 1967 Red Sox." The crowd wasn't huge, but we all had a good time watching. And when Yours Truly popped up, I heard some scattered applause among my friends. I thought it was a really well-made documentary, and director Brett Rapkin was among the patrons. Brett did a great job with the interviews and mixing in great old footage from the mid-1960s. It's narrated by Mike O'Malley and it also featured interviews with people like Bob Ryan, Dan Shaughnessy, Ted Kennedy and Theo Epstein.

And me, too. (I was identified as "Red Sox Trivia Maven." Nice touch.)

I had to "beat back" the autograph hounds afterwards. ("Go talk to my agent," I told them.) A few of my friends were giving me some good-natured razing afterwards. Still, I was really pleased with the way it turned out, and I was proud to take part in it.

As we waited for the Red Sox-White Sox to begin as they were in a rain delay, my friend Chris put on an extra added feature of the DVD: the next-to-last game of the 1967 season between the Red Sox and Minnesota Twins. It was broadcast by NBC nationally, and it was a treat to watch a game from 40 years ago in its entirety. I also went to the computer and printed out the box score of the game from Baseball Reference, and followed along with it. The differences between baseball then and now are so incredible. Just watching that game is worth the price of the DVD itself.

Even if I do say so myself.
Posted by The Omnipotent Q at 1:10 PM

& one could see the 20,000 Crowds in Yankee Stadium, even when the Red Sox were in town;

WHDH 850 is now WEEI. There was no Sports Radio, in those days, like 'EEI or 'FAN

On Sunday, the Last Day of the ;67 Season, NBC Cut into AFL Coverage, to announce that the Boston Red Sox had just won the AL Pennant, @ around 4:25PM, ET, on WNBC4