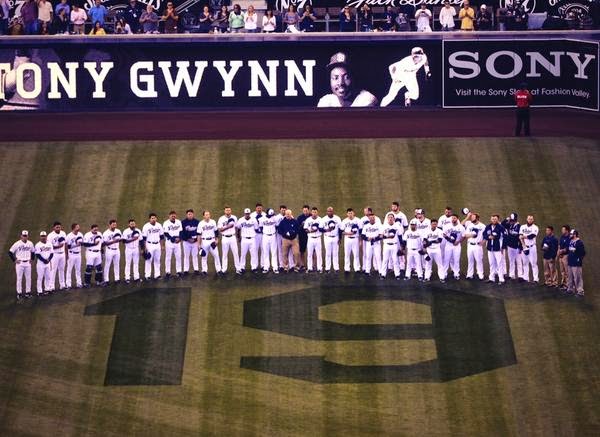 Well, we all knew it was going to be "The Derek Jeter Show" at the All-Star Game last night, and it certainly was.

Fox made sure everyone knew this was the retiring Yankee captain's final All-Star appearance, with 100 mentions of him throughout the night. Listen, I have no problem with that. I thought John Farrell handled Jeter's leaving in the game in 4th inning perfectly, as he substituted Alexei Ramirez for him before the inning started, so Jeter could soak up all the applause. More than fine with all that.

Controversy sprang up late in the game when Adam Wainwright admitted he "grooved" a fastball to Jeter in the first inning, and he slammed it for a double, and later scored on Mike Trout's triple. Wainwright certainly isn't the first pitcher ever to do something like this, but in a game that now "counts", that wasn't the smartest thing to do, as it led to the AL's 5-3 win, and gives the AL team the home field advantage in the World Series.

The All-Star Game was better when it was just an exhibition game, the AL vs. NL meeting for league pride. That is all gone, as now it has to "count." (Interleague also ruined it, but that's another story.)

But what bothered me most last night was the Fox coverage. Jeter was going to be the star of last night's coverage and you accept that. But with all the Jetermania, the incessant commercials about "Gotham", Fox stars "who just happened to be there", there was no mention of six great stars of MLB who died this year: Tony Gwynn, Ralph Kiner, Bob Welch, Jim Fregosi, Jerry Coleman and Don Zimmer (Gwynn, Welch and Zimmer all died within the last month).

How you can have a 3+ hour broadcast and have not a single mention of any of these great players is simply mind boggling. Especially of Zimmer, who was close to Jeter in his championship years. (I noticed that David Price touched his "ZIM" patch when he was introduced. No mention of that.) The losses of Zimmer, Welch and Gwynn were still fresh in the minds of baseball fans, especially Gwynn, who died at the very young age of 54.

The Padres sure noticed Gwynn's snub, and after the game tweeted the above picture, with no caption. Very classy.

Last night was NOT Fox's best hour, as Joe Buck, Harold Reynolds and Tom Verducci should have known better. I'm waiting for the excuses Fox will come up with for dropping the ball on this one.
Posted by The Omnipotent Q at 12:06 PM