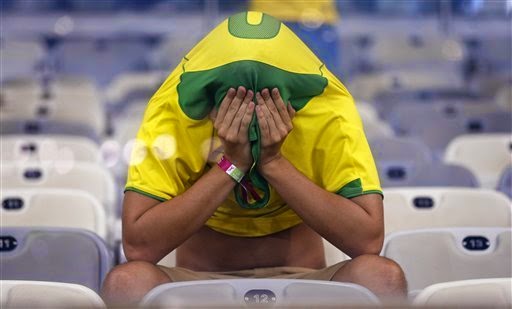 Germany stomped all over Brazil in yesterday's World Cup semifinal, 7-1. To say it shocked the sports world would be an understatement.

The Germans added on in the second half, and it was 7-0 by the 79th minute. The Red Sox added on, and by the fourth inning it was 8-1. Brazil added a late consolation goal, and the Yankees scored what amounted to runs that made the score look a little more respectable by the 7th inning, 8-3. But the Sox put it on ice late for a 10-3 win and a trip to the World Series.

The German win puts them in the World Cup Championship final on Sunday against the Netherlands-Argentina winner. (Technically the World Series isn't a World Championship series, although it is called one. Close enough.)

And of course, both losing squads were humiliated at home.

And if that wasn't enough, here's a cool clip of the great wrestling announcer Jim Ross, with his commentary put over yesterday's 7-1 German thrashing, courtesy of Deadspin. Good stuff.
Posted by The Omnipotent Q at 11:25 AM