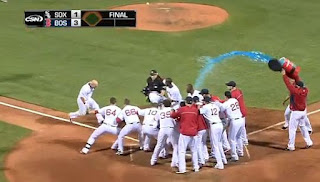 I was watching last night's game at Professor Thom's with my buddy Joe and it was a frustrating evening to say the least.

Jose Quintana was very sharp for the White Sox, allowing the Red Sox just five hits in eight innings before leaving. Clay Buchholz was terrific too, allowing just a sacrifice fly in the 4th inning, and he also went eight innings.

The Red Sox had few chances to score, the best being in the 7th, when they had the bases loaded with one out, but Will Middlebrooks hit into a double play. It appeared like the night was going to end with a frustrating 1-0 loss.

I turned to Joe just before Cody Ross stepped up with two on and one out in the ninth and reminded him of his three-run home runs heroics of the night before. The Rodeo Clown struck again, hitting an Addison Reed inside fastball and crushing it into the Monster seats for an important 3-1 win, and a 3-1 series win over the White Sox.

I don't want to sound like a broken record on this subject, but the antics at home plate after the home run were just play stupid. Listen, I was excited that Ross won the game with a big time home run. But as many of you may know, I have been going on about these idiotic home plate (and infield) celebrations that teams do just because someone wins a game in their last at-bat at home. And what the Red Sox did last night left me holding my breath last night: Ross getting his jersey ripped off, littering pounding on him, and that dumb nonsense with the Gatorade bucket (see picture, with thanks to Joy of Sox).

I may sound like some kind of killjoy, but every team does this dumb nonsense. Does ANYONE remember Kendrys Morales and what happened to him at home plate in May 2010? Of course not. That idiocy only cost him a year and a half of his career.

Another accident WILL happen. Mark my words. MLB will only do something about this lunacy when a star player gets injured. I only pray he's not wearing a Red Sox uniform.
Posted by The Omnipotent Q at 12:11 PM