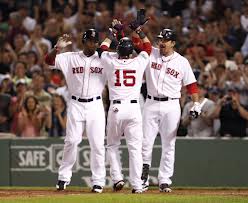 I honestly feared this game. The Red Sox had won back-to-back games in New York, and I thought returning to Boston there might be an immediate letdown. Clay Buchholz gave up a home run to the Tigers' Austin Jackson on the second pitch and a double to Quintin Berry. My fears were growing. I turned my TV off and had dinner.

I returned to find the Red Sox up 2-1, as Jacoby Ellsbury walked to open the first, Carl Crawford tripled him in, and Dustin Pedroia's ground out made it 2-1.

Buchholz allowed Detroit to tie it in the third, and it stayed 2-2 until the sixth when Pedroia blasted a two-run shot to but the Sox up, 4-2. It was 5-3 in the 8th when Will Middlebrooks hit a line shot in the Monster seats to make it 7-3.

In that same inning, Ryan Sweeney was robbed off a hit by Omar Infante, who made a great diving stop in the hole at second and threw him out. Sweeney was visibly upset entering the dugout, and in the top of the ninth, Cody Ross took over in RF for Sweeney. That didn't make much sense to me. Sweeney is the better OF, why would Ross go in for defense?

Turns out that Sweeney was so upset he punched a door (or was it a wall?) in frustration and injured his hand. He will have an MRI today, and it appears he maybe heading for the DL.

Note to Ryan: going three rounds with immovable objects in and around the dugout is never a good idea. Objects almost always win.

Anyway, Buchholz got his 9th win, going 8 innings and allowing just 2 earned runs. He is unquestionably the ace of the Red Sox staff right now.

The trading deadline is at 4 PM today. I don't anticipate the Red Sox doing anything major today.

UPDATE: Ryan Sweeney has a broken hand, and will miss up to 8 weeks. Ryan Kalish will be called up from Pawtucket to take his place.
Posted by The Omnipotent Q at 11:01 AM