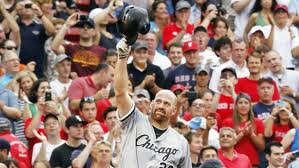 It was a memorable and emotional night at the Fens on Monday.

Kevin Youkilis made his return to the park he called home for eight years and got the standing ovation he richly deserved in the top of the first. (Another one of those moments that made me proud to be a Red Sox fan.) He promptly singled and scored the first run.

It was a big night for Youk, as he went 3-for-4, including two doubles. (My pal Jere at A Red Sox Fan From Pinstripe Territory has many cool pictures and clips from the game.)

But in the bottom of the first, Carl Crawford made his Fenway debut for 2012, and did the same thing Youk did: singled and scored, and that tied the game at 1.

Aaron Cook was terrific. He went seven innings and allowed the White Sox just one run. In the eighth inning, Crawford opened with a walk, as did David Ortiz. And Adrian Gonzalez sent a booming drive to left that landed in the Monster seats. Every Red Sox fan had to let out a cheer for A-Gon for that one. A big time clutch home run, something we haven't seen in a quite some time.

The Red Sox added another run in the eighth, and won, 5-1.

As David Ortiz was coming home during the home run, he was slow to reach the dugout, and had to be helped down the steps. He bruised his heel earlier in the game on a base hit, and will have an MRI later today. He may only miss a handful of games. Keep your fingers crossed.

Just when this lineup was finally coming together...
Posted by The Omnipotent Q at 11:26 AM