It Ain't Broke, So Break It Anyway 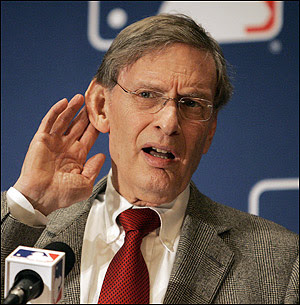 As you all know by now, MLB announced today that it is going to a format where ten teams will make the postseason in 2012, and not just eight. A wild card is being added to each league, and there will be a wild card playoff game between to the wild cards to determine who moves on to the division series.I don't like it at all. It's an artificial money grab by MLB, and makes the regular season even less important.My friend Adam, who has commented on my blog a few times in the past, sent me a terrific email today with why he doesn't like it. I agree with him 100%, and I'm sure many of you will too.

Why should the division-winners be rewarded and Wild Cards punished? With an unbalanced schedule, teams in weak divisions have an advantage. Last year, seven AL teams finished .500 or better. Four of those teams were in the AL East.
The Detroit Tigers won the AL Central with 95 wins last year. That seems pretty impressive until you look closer. The Cleveland Indians finished in 2nd place with an 80-82 record (.494 WP). The teams in the East and Central play 72 games in their division. That's roughly 44% of their schedule. Another 11% or so is taken up by interleague play (no two teams play the same interleague schedule). Detroit was in impressive 50-22 (.694) in their division. That's not surprising because they were the only good team in the Central. How good were they, though? The Tigers were a .500 team (45-45) against non-AL Central teams last year.
The Red Sox were on of three AL East teams to win at least 90 games last year. The East was clearly the toughest division in the AL last year. Boston finished 38-34 (.528) against their division and 52-38 (.578) against everyone else. One could make a pretty fair argument that the Sox would have won more than 95 games if they played in the AL Central like the Tigers.
The proponents of the new system are happy because it "punishes" the Wild Card teams. In my opinion, the WC was already “punished” enough because the WC team opens every playoff series on the road, no matter how many games they have won. Looking back from 1996 (1995 was a shortened season), the AL WC team almost always better than one (sometimes two) division winners. In 16 seasons, the WC was the 4th best team twice!! Only once did a WC team make the post-season with fewer than 90 wins (the 1996 Orioles: 88 wins). In 10 of 16 seasons, the WC team won 95 or more games. Over the same period, the 3rd best division winner only won 95+ games three times. Almost a third of the time (5 of 16 seasons) the worst division winning team won fewer than 90 games. Over the 16 full seasons with the WC, the AL WC team averaged close to 95 wins (94.6) while the 3rd best division winner averaged 91 wins.
The divisional system is inherently biased because there are tougher and weaker divisions. Teams playing in tougher divisions already start the season at a disadvantage. Divisions are arbitrary constructs loosely based on geography. WC teams were already at a disadvantage under the old system. Far more often than not, the AL WC has been better than at least one division-winner. The teams with the best records should get into the playoffs—and a 162-game season should only come down to a 1-game playoff as a tie-breaker. When you factor in the unbalanced schedule and how few good teams there are, the new system makes little sense. I feel that it makes the regular season meaningless to some extent.

Posted by The Omnipotent Q at 4:13 PM