I Can Never Thank Them Enough 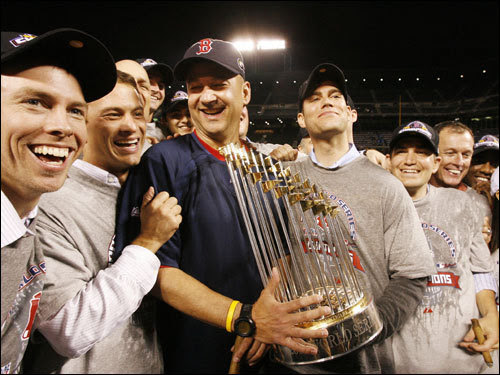 A new website was just launched where Red Sox fans can offer their thanks to both Terry Francona and Theo Epstein, for all they did to bring two World Series titles to the city of Boston. It's called "Thank You Theo and Tito", and you can show your appreciation to both by writing a note to both men.

I will be writing something over there shortly, and it will likely be along the lines of what I once said to Tom Werner and John Henry, when I met both of them in Professor Thom's one summer night in 2007. Pointing to the 2004 World Series champions hat I was wearing, I said:

"Thank you for this, and for making my life in New York City so much more bearable."

I will never be able thank Mr. Epstein and Mr. Francona enough for everything they did the past decade. May God bless them both.

(With thanks to Allan at Joy of Sox, who alerted me to this website.)
Posted by The Omnipotent Q at 1:38 AM