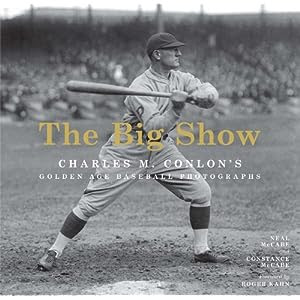 There's a new book out called "The Big Show", and it has absolutely nothing to do with a left-wing broadcaster or a professional wrestler. It is actually a coffee-table book of old time photographs of MLB players from the first half of the 20th century.

The pictures were taken by the renowned photographer Charles M. Conlon, who took over 30,000 photos of baseball players between 1904 and 1942. The book contains many from the upper echelon on the sport, like Babe Ruth, Connie Mack and Walter Johnson. But "The Big Show" also includes pictures of lesser known players, like Joe Grace, Randy Moore and Roy Weatherly. Household, as well as non-household names get their equal due in the book.

Each page as a different player, with text written by Neal and Constance McCabe. Roger Kahn, the profilic baseball author, wrote the foreword. The book is actually a follow-up to the acclaimed "Baseball's Golden Age," which was the first book of Conlon's photographs.

I've always been fascinated by baseball from the early 20th century, and if you are too, you should pick up this book. Lots of great stories as well as photos, as it was fascinating seeing and reading about Leo Durocher as a New York Yankee in 1929. And the story of Buck Weaver, who was one of the eight "Black Sox" who were banned from baseball in 1921, is also very interesting.

"The Big Show" is a terrific book of rare photographs, many never before published, from baseball's "Golden Age." I enjoyed it, and if you love baseball history, I'm sure you would too.
Posted by The Omnipotent Q at 11:14 AM