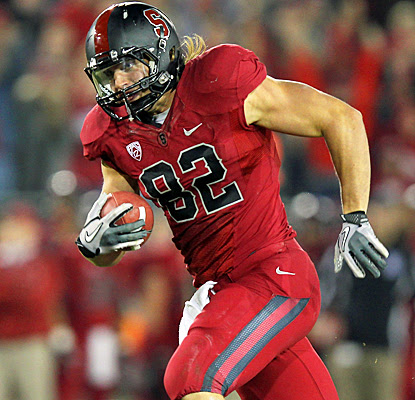 I took in the game with my fellow Notre Dame fanatic Joe at Professor Thom's last night. (It was a lot quieter after the afternoon was packed with thrilled Michigan fans celebrating their first win over Ohio State since 2003.) It was all Stanford from the start, and Irish QB Tommy Rees was benched early, after fumbling and throwing an interception. Andrew Hendrix came on in the first quarter and really couldn't get anything going until the third, when he hit Michael Floyd with a 6-yard pass that made it 21-7.

Stanford had all the luck: Andrew Luck, that is. He threw four TDs, including two to wide receiver Coby Fleener (pictured). BTW, is he any relation to Felix Unger's onetime love, Mildred Fleener?

Anyway, Stanford debuted their new uniforms last night: all red. Why do some college and pro football teams insist on wearing the same color for pants and jersey? I find that color scheme rather butt ugly. I've always believed that they should have either white pants OR a white jersey to go along with their team color. The Oregon Ducks own the ugliest uniforms in football, but this Stanford uniform isn't too far behind.

Notre Dame scored a garbage-time TD by Hendrix in the final seconds that made the score a little more respectable at 28-14. The QB ended the night 11-for-24 for 192 yards. Nothing remarkable to be sure. Notre Dame ends the regular season at 8-4, and now waits to see what bowl they end up in. My friend Joe thinks it's the Gator Bowl. We shall see.
Posted by The Omnipotent Q at 11:56 AM