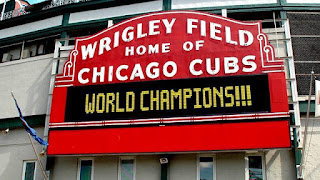 That was a World Series for the ages, eh?

And a Game 7 that will go down in Series lore, that's for sure.

The Chicago Cubs finally did it, and won their first World Series since 1908 with a stunning 8-7 win over the Cleveland Indians in 10 innings.

You can argue that this was the greatest Game 7 in MLB history. It had everything: clutch hits, untimely errors, game-tying home runs, head-scratching moves by the managers, and even an extra-inning rain delay.

No question it will be remembered forever. The Cubs blow a three-run lead in the 8th, and it looks like the so-called "curse" would continue, as the momentum was in the home team's favor at that point. But the gritty Cubs held on. A totally gassed Aroldis Chapman got the Indians 1-2-3 in the 9th, and then the rains returned, and held the game up for 17 minutes. The Cubs can consider this a blessing.

Tribe reliever Bryan Shaw walked Kyle Schwarber to open the 10th, and Alberto Almora went in to run for him. Kris Bryant hit a ball to the warning track in right center, and Almora tagged and went to second. It would prove to be the smartest (and most overlooked) play of the game, as the Indians walked Anthony Rizzo intentionally. Series MVP Ben Zobrist lined a double to left, and Miguel Montero singled to left, and the Cubs had a two-run lead they would carry into the bottom of the 10th.

Good thing they scored two. With two outs, 8th inning hero Rajai Davis singled in a run off Carl Edwards to make it 8-7. Joe Maddon brought in Mike Montgomery to face Michael Martinez, the light-hitting outfielder who was brought in in the 9th inning for Coco Crisp. That move would backfire on Terry Francona, as Martinez was the last man on the bench, and he grounded out to Kris Bryant, and the Cubs had their long-awaited third World Series title.

The Cubs became just the sixth team ever to comeback from a 3-1 deficit to win the World Series, the first to do it on the road since the Pittsburgh Pirates did it in 1979.

I'll admit I was pulling for the Cubs to win it all since the moment the Red Sox were eliminated in the ALDS. Through their Series run, I had flashbacks to 2004 seeing the Cubs come from 3-1 down. Like the 2004 Red Sox, they had to put their fans through all kinds of hell in the postseason, but they came away with the ultimate prize.

I guess you can get the Hall of Fame plaque ready for Theo Epstein. He's brought championships to two devoted fan bases that longed to see their clubs make it to the Promised Land. 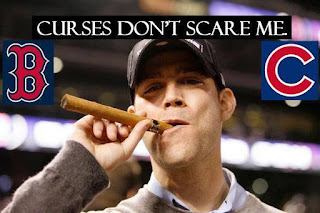 And I feel for Terry Francona today, and the Indians fans. Tito is one of MLB's best managers, and proved it again this postseason. He handled the loss with class and grace, and he should also have sealed a place in his Cooperstown, despite his team's loss.

Joe Maddon maybe the luckiest man in Chicago today. While he's a great manager, he made some moves I still can't understand. Kyle Hendricks was in total command in the 5th inning, the Cubs with a 5-1 lead. He walks a batter with two outs, and brings in Jon Lester. He did the Indians a favor at that point, and after an error by David Ross, he wild pitched in two runs, and the Indians had new life. And Maddon totally overworked Chapman in the last three games of the series. Maddon's very lucky today, as had the Cubs lost, the name "Grady Little" might be following him forever right now.

My congratulations to all Cubs fans out there today, from all of us in Red Sox Nation. It's a great feeling to see your team win it all, after having to endure crap from the media for years and years about made-up curses and all that. Enjoy the afterglow of seeing your team in the winner's circle.

It never will get old, Cubs fans. Trust me on that.
Posted by The Omnipotent Q at 1:00 PM