America Has Always Been Great, and Always Will Be 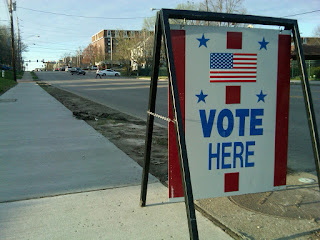 Well, this is the day when the United States of America will elect a new president, and it has always been a big deal and an important day for the country.

Today, the majority of the nation just wants to get it over with.

One of today's candidates has a slogan that says "Make America Great Again." I would argue that America has ALWAYS been great, going back to our painful divorce from the British Empire. We were the first to give democracy a go, and it has attracted people from the four corners of the earth wanting to be free.

America has gone through a lot in more than two centuries. We went through a civil war to rid the nation of the scourge of slavery. We've gone through two world wars, a terrible Great Depression, other wars that tore at the fabric of our nation, and a terrorist attack 15 years ago that sought to disable our way of life.

We've come through it all. And we're still here.

No matter who gets elected today, America will go on. Whoever gets elected, we will have a divided electorate, many of whom will be very angry at who was chosen. They'll just have to grin and bear it.

The important thing is to vote. Vote your conscience. If you see fit not to vote for either of the two major party candidates, so be it. Your vote matters, no matter who you decide on.

And it's YOUR choice who to vote for. It's not my place to tell anyone who to cast their ballot for. That's for you and you alone to decide.

Men and women down through the centuries have put their lives on the line so we can have a day like this. We can go to the polls and decide who will run the store for the next four years. We honor their memory and sacrifice so we can have a free election, something that is unheard of in many parts of the world. Keep that in mind when cynicism creeps into your mind. It did for me, and I don't like either major party candidate. But I will do my part and cast a ballot today.

The United States of America IS a great nation. And it will be no matter who gets elected today. We've had our ups and downs, but we're still here.

Abraham Lincoln once said that America was "the last best hope of earth." That is especially true on this day. So, go vote. Make Honest Abe proud today.
Posted by The Omnipotent Q at 11:11 AM