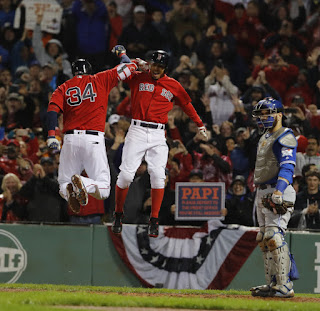 MLB handed out their awards this past week for 2016, and there weren't many big surprises.

Rick Porcello won the AL Cy Young Award, in a very close race with Justin Verlander. Verlander had more first-place votes than Porcello (14-8, out of a possible 30 votes), and he was left off two voters' ballots entirely. But Porcello had more first and second place votes than Verlander did (24-16), and that was difference, with Rick taking the award by five points (137-132). Corey Kluber finished third and Zach Britton was fourth.

You may have heard that Verlander's girlfriend, model Kate Upton, wasn't happy with the results.

The only other person connected to the Red Sox in an awards race was John Farrell, who finished fourth in the AL Manager of the Year award. Old friend Terry Francona won the award for the second time, having previously won in 2013 with the Indians. (How didn't Tito not win in 2004?). Jeff Banister finished second, and Buck Showalter finished third.

Nice to see another old friend in the awards winner circle in 2016, as Dave Roberts won the NL Manager of the Year for the fine work he did with the Dodgers in his first year as a manager, leading them to the NLCS this season.
Posted by The Omnipotent Q at 2:11 PM