It's Theo Vs. Tito For All The Marbles 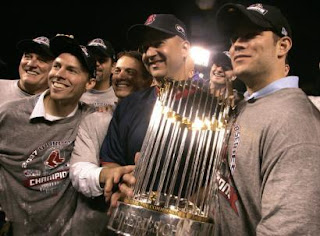 History was made last night as the Chicago Cubs won their first pennant since 1945, as they beat the LA Dodgers, 5-0, to win the National League Championship Series in six games.

Jon Lester and Javier Baez were named co-MVPs of the series.

I was pulling for the Cubs to make it to the World Series throughout this postseason, as it would truly have been fun to see the Cubs play the Red Sox for the World Series title. That was not in the cards. And, as someone born and raised in Brooklyn, it was a pleasure to see them knock the Los Angeles Dodgers out of the postseason. (And now they've got a significant streak of not making it to a World Series: 28 straight years.)

In the ninth inning, I was getting a bit emotional, and I'm not even a Cubs fan. The TV was showing fans praying, and some with tears in the eyes as to what was finally unfolding before their eyes. And for me, it brought back some precious memories of the 2004 postseason. So I know EXACTLY what those fans were feeling at those moments.

The Cleveland Indians wrapped up the AL pennant last Wednesday, beating the Toronto Blue Jays in five games. And now this means that Theo Epstein and Terry Francona will face off against each other to see who will raise the championship trophy this season.

I am very happy for both men. They are two of the classiest baseball men in the business today, and they will forever be remembered for bringing not one but two titles to Boston. And, no matter how this turns out, both will one day be enshrined at Cooperstown.

A lot of Red Sox fans are seeing this unfold with a sense of "what could have been" had both men stayed in Boston. After the disaster of 2011, it appeared that both needed to move on. And they did, both to struggling franchises that needed to be rebuilt. It was sad that both left town under such lousy circumstances, but that's just the way it turned out.

Plus I think to myself, "how many titles have the Red Sox won since they both departed?" The answer to that is one: the glorious win of 2013. There's no telling what would have happened had they both stayed. But the Sox have had success since 2011, and are absolutely headed in the right direction. (And please, don't "denigrate" what happened in 2013 as some kind of "fluke, " as some baseball "experts" have implied. It wasn't. You don't win 108 games in total and call it some kind of fluke. Treasure it, folks.)

I guess the old saying "don't be sad it's over, be glad it happened" applies here. Both Theo Epstein and Terry Francona are great baseball men, and have built their current franchises into winners (it took Theo five years, Tito four, so it didn't happen overnight). They will be forever remembered by Boston and Red Sox fans everywhere as the ones were most responsible for bringing two titles to Red Sox Nation.

I wish them both well, and hope we have a great World Series to conclude 2016.

I like the Cubs in six games.
Posted by The Omnipotent Q at 11:34 AM