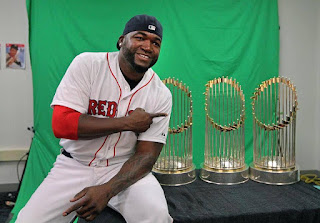 At 9:51 PM last night, Travis Shaw flied out to Lonnie Chisenhall in right field, and the Red Sox 2016 campaign came to an abrupt conclusion, as they were swept by the Indians three straight in the ALDS.

But it also marked the end of the stunning career of one David Ortiz.

Papi closed his career with 38 HRs and 127 RBI in his age 40 season. It was simply the greatest season any player has had to close a career. None of us wanted it to end the way it did, with the Red Sox losing at home and leaving the playoffs after just three games. But it did. I found myself getting emotional as the ninth inning was beginning last night. The Large Father is leaving all of us a million great memories, and most of them seem to flash back to me in the ninth.

Big Papi came out a few minutes after the game ended to salute the crowd that had not left, and had tears in his eyes as he took in their cheers one last time. He said nothing, as it was clear he was too choked up to speak.

The Cleveland Indians were just better in this series. They hit more, pitched better, and played better defense. This is a very good team, a team capable of going all the way to the end, and they have one of MLB's best managers in Terry Francona. They deserved to win this series.

Was this 2016 season a success or a failure? I would call it a success, no question about it. While David Ortiz is leaving, Mookie Betts is an MVP candidate and Xander Bogaerts and Jackie Bradley have emerged as solid, dependable players. Hanley Ramirez had an amazing bounceback year, and Dustin Pedroia is still a force at age 32. (He should be made captain now that Papi is retired.)

The pitching, both in the rotation and in the pen, needs some fine tuning over the winter, but I would say the future looks bright for the Boston Red Sox. Andrew Benintendi and Yoan Moncada will be stars down the road. There's a lot to love about this team right now. They are young, and like the Chicago Cubs this season, they may have an even better team next year after this early round loss.

After all, how could you not think this year was a success after two straight last-place finishes? The Sox went back to first place after two seasons of looking up at everyone else. The pieces are in places for a nice run for this team. I'm betting John Farrell returns as manager in 2017. I had my issues with him this year, but the late-season surge almost guarantees he will be back for another year at the helm.

The 2017 season begins in 174 days, as the Sox open at Fenway on April 3rd against the Pittsburgh Pirates.

I close with this personal note to David Ortiz: