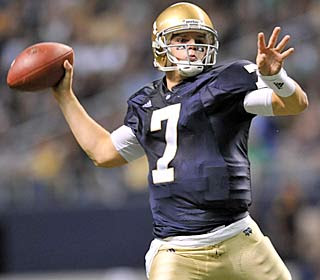 The title of this post just about sums up what Notre Dame's easy 40-14 win over Washington State felt like last night. ND was a 25-point and just covered. And it was the first time all year that Irish fans could breathe easy in the fourth quarter.

It was a big night for Jimmy Clausen, who went 22 for 27 and 268 yards. He threw two TDS, including a desperation Hail Mary of 50 yards to Golden Tate at the half that he pulled down to give ND a 30-7 commanding lead.

Duval Kamara scored the first TD on a pass from Clausen, Tate also had a 16-yard run for a TD, and Robert Hughes had the other first half TD. He was in for the injured Armando Allen, and had 131 yards on 24 carries.

Clausen left the game in the third quater, as he reaggravated the turf toe that has been bothering him all season. He was replaced by Dayne Crist, who threw a 64-yard TD to John Goodman that capped the Irish scoring for the night. Crist suffered a knee strain when he was tackled late in the game, and was replaced by third-string QB Evan Sharpley.

ND played this game in the Alamodome in San Antonio. I was wondering why they played a game in Texas against Washington State. It appears they wanted to impress the sought-after Texas recruits, and they may have just succeeded with this performance.

The Fighting Irish, now 6-2, take on Navy at South Bend next Saturday afternoon, in what should be a tough game. When was the last time you could say that about a Notre Dame-Navy matchup?
Posted by The Omnipotent Q at 10:34 AM