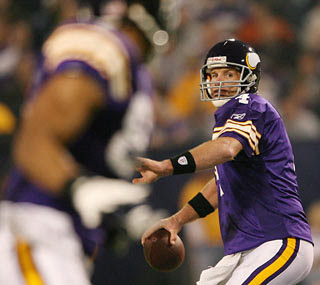 Just when you thought Brett Favre's incredible first season in Minnesota couldn't get any better, it does.

The Vikings took the Chicago Bears out to the woodshed on Sunday afternoon at the Metrodome and simply stomped all over the one time Monsters of the Midway with an overwhelming 36-10 win.

The Vikes are 10-1, 5-0 inside the NFC North, and Favre once again had another banner afternoon among the Minnesota faithful. Favre threw three more touchdowns, and threw for 392 yards, which was just 10 yards off his all-time high. It was the fourth highest total of his fames career.

Adrian Peterson scored the last TD to ice the game in the fourth quarter. He rushed for 85 yards, but he also fumbled twice. One was lost early in the game, and the other was reversed when the Vikings challenged it. Peterson has now fumbled 7 times this season, and 15 over the past two seasons, the most by any running back.

The loss finishes the Bears, who are now 4-7. The Vikings still lead the NFC North by 3 games, as Green Bay won on Thanksgiving Day. It was another well-rounded day for the Vikings, who face Arizona in Phoenix next Sunday night.

The more I see this team, and how easily they are making it look, it reminds me so much of the 1998 Vikings, who set the scoring record and went 15-1. They won't score more points than that team, but this team is just as good as they were. I certainly hope the end turns out better for the 2009 squad than the way that year concluded 11 years ago.
Posted by The Omnipotent Q at 2:23 AM