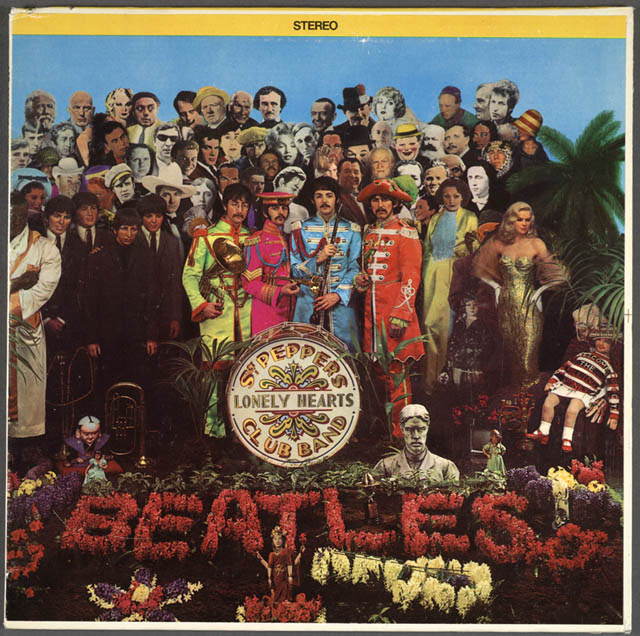 I haven't written too much on my blog here lately about baseball, but that will soon change, as pitchers and catchers begin reporting for spring training a week from today. I figured that during the off season, I would write about other sports and other things in my life. But the Red Sox and baseball are still a priority here.

We will finally get above 32 degrees here in New York today for the first time in one week. This cold stretch has left me with the beginnings of a nasty cold that I feel will be hanging around for a while.

Now on to the gist of this post. My friend Eddie in Maryland sent me his list of his Top 10 albums of all-time. I had wanted to write a few Top 10 lists of all different topics this winter, but something was always popping up and I kept putting it off. So I've given it some careful consideration, and here is my official list of the 10 albums I could not do without. (There are generally in no specific order, except for number one.)

1. The Beatles, "Sgt. Pepper's Lonely Hearts Club Band." The greatest album ever made, bar none. I would guess it's on most people's lists, but this is the album that literally rewrote pop music. Every song on the album has its own backstory. "Sgt Pepper Reprise/A Day In the Life" is one of my all-time favorite songs.

2. Steely Dan, "Aja." I am a HUGE Steely Dan fan, and there are so many great albums form them (I am limiting myself to one album per artist on this list). I could have put "The Royal Scam," "Gaucho" or "Countdown To Ecstacy" on this list, but "Aja" made a big fan. I never, ever get tired of listening to it.

3. The Dave Brubeck Quartet, "Time Out." I'll never forget back in 1988 when one of my friends at Tower got a promo cassette of this album and he gave it to me, and I was hooked. This was the album that got me interested in jazz, especially from the 1950s and 1960s. Still sounds fresh and contemporary, and ol' Dave is still doing concerts at the ripe old age of 87.

4. Pink Floyd, "Meddle." Pink Floyd is like Steely Dan to me in that I could have put a number of different albums here, but "Meddle" is my favorite. Side Two is one long song called "Echoes," but side one is just superb. "Fearless" always gives me the chills when I hear the Liverpool soccer fans singing "You'll Never Walk Alone."

5. The Bill Evans Trio, "Everybody Digs Bill Evans." My second favorite jazz album, and after the first time I heard it, I got a number of Bill's other albums (fortunately the company I worked for distributed most his catalog, so I got them gratis). He was one of the great piano players of all-time, and died way too young. "Peace Piece" is one of my favorite solo piano songs.

6. Talking Heads, "Stop Making Sense." I'm not a huge fan of live albums, but this is probably my favorite live album of all-time. (Peter Frampton, Dire Straits and Joe Cocker's live albums are close.) I also loved the movie, especially when David Byrne puts on his white "big suit." BTW, Whatever happened to David Byrne? (I used to see him at Tower Records in the Village all the time when I worked there.)

7. Dire Straits, "Brothers In Arms." Another of my all-time favorite bands, and I've always thought that Mark Knopfler was one of the most underrated guitarists of all-time. I saw the band in 1992 live and Mark solo in 2005. I wish they would make another album together at some point.

8. Chicago, "Chicago Transit Authority." Chicago's first and best album. Very underappreciated, and maybe one of the best debut albums ever. I was a big Chicago fan until they transformed themselves into a drippy, easy-listening band.

9. Traffic, "The Low Spark of High Heeled Boys." I still love to put this album on, especially when working on my computer (like right now). I still love Steve Winwood's vocals, especially on this album. The title track is another one of my all-time favorite songs.

10. John Lennon, "John Lennon/Plastic Ono Band." John's first solo album after the Beatles split, and it's one of the most powerful albums ever recorded. John lets it all fly here, and songs like "Mother," "Love" and "God" are nothing short of haunting. I can never get through this album without a tear in my eye.

I know I've left some great ones out, but that about wraps it up for now. Hopefully I'll have some more Top 10 lists to share with you soon.
Posted by The Omnipotent Q at 12:31 PM

The Plastic Ono Band was certainly the best John ever did after his band became 4 individuals. Breathtaking Lennon...raw and vital. SGT. PEPPER? I remember that day in June of '67 that I came home with it, clutched in my hands and jumping for sheer joy. Little did I know what I held in my two paws. And this was after the quantum leap of '65's RUBBER (or as Paul first said, Plastic) SOUL, and then amazingness, the LP that changed EVERYTHING we knew about music, REVOLVER, which should have been on your top 10 somewhere. But I can't complain, not while I'm HERE.
Again, your musings amaze me. And I thank you for that. Healthy and happy weekend!