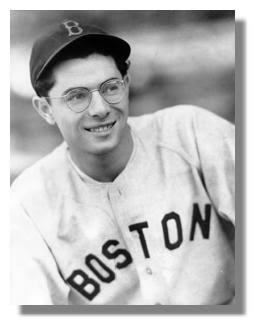 A very happy 90th birthday today to one of the most underappreciated players in not just Red Sox but baseball history, Dom DiMaggio.

Dommie's still going strong at 90, dividing his time between homes in Massachusetts and Florida. He played with style and grace under the shadow of his more famous brother playing in New York. He was called "the Little Professor" because of the glasses he wore while playing. Here's his complete baseball record, courtesy of Baseball Reference: http://www.baseball-reference.com/d/dimagdo01.shtml

He was a smart ballplayer, but he is also the consummate gentleman to everyone who knows him. Many feel he belongs in Baseball's Hall of Fame. Dan Shaughnessy wrote a nice article about him in yesterday's Boston Globe that's worth checking out.

A very Happy Birthday to ol' number 7. Here's hoping you have many more, Mr. DiMaggio.
Posted by The Omnipotent Q at 12:47 PM