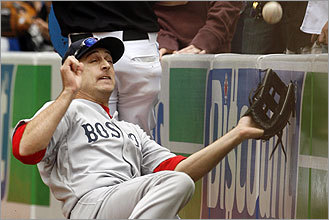 Another rotten day north of the border.

A promising beginning went up in smoke, as the Sox jumped out to a 3-1 lead, courtesy of Mike Lowell's RBI single and a two-run blast by Rocco Baldelli (who later left the game with a knee contusion, as he slammed into the all along right field going after a foul ball, pictured above.) They had Brian Tallet on the ropes those first two innings but came away with just the three runs.

And they managed just one hit the rest of the way, as Tallet settled down and went seven innings. It was yet another lost day for David Ortiz, who went o-for-4 with 2 strikeouts. He is now 2-for-19 since he was moved to the six spot. Very ungood.

Kevin Youkilis took the collar and struck out three times. The Sox continue to struggle for runs on the road, and have scored just 13 runs in their last five games, losing four of them.

Brad Penny pitched his usual game, allowing just two earned runs in six innings. He continues to do the job as the fifth starter: keeps the Red Sox in games and gets them to the seventh.

But Ramon Ramirez had his first bad outing of the season, allowing two runs on three hits in the seventh as Toronto pulled ahead and won, 5-3. The Red Sox look to salvage the final game in Toronto with Jon Lester going. They are now 1 1/2 games behind New York, as the Indians once again rolled over like dogs last night, 10-5.

I watched yesterday's game on my computer, with MLB.tv. My friend Chris allowed me to check it out, as he has a subscription to it, and I couldn't see it on TV here, as MLB has those rules about early Saturday afternoon games only can be seen in the two clubs' markets. It was the first game I've ever seen on a computer, and it was pretty cool. I have the Extra Innings package, so I rarely miss a game. But I do recommend MLB.tv.
Posted by The Omnipotent Q at 12:14 PM

I have XM Radio and can get any baseball game on the radio. The Cable package is a godsend but my attention span is so short I flip between all the games and never can settle on one. Radio fits my concentration better.