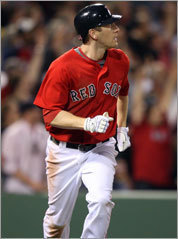 It looked like the Sox were going down feebly against the Rays' James (Little Game) Shields. They had just four hits through the first four innings. But in the fifth with two on and none out, the Anti-Manny, one Jason Bay, stepped up to the plate. And you could just feel he was going to do something huge.

And he sure did. Little Game James left a fat 0-2 fastball over the plate and Bay blasted it off the Sports Authority sign to knot it up at 3. It was Bay's third three-run shot of the week, having done it Tuesday against New York and Thursday during the 12-run barrage aginst the Indians. And Shields really unraveled (did you see his reaction to giving up the home run?), as he threw a changeup to J.D. Drew two batters later and he deposited it in the rightfield stands to give the Sox a 5-3 lead. (It was a nice tribute to the late Dom DiMaggio, as he also wore number 7, which was cut into the centerfield grass last night).

Brad Penny was decent again last night. He went 6 1/3 innings and gave up three runs and got the win, as the Sox scored five in the sixth. He only had one rocky inning and that was the first when Tampa Bay scored its first run.

The Red Sox added two insurance runs in the eighth, and Jonathan Papelbon slammed the door on the Rays in the ninth.

I watched the Red Sox-Rays on the MLB Extra Innings package last night and I have to admit that Dennis Eckersley is starting to grow on me. Eck is a bit of a homer, but I do love his brutal honesty. Don Orsillo asked him the other night about umpires and if he had any friends with them. "No, none, zip." said The Eck. Very little PC with him.

But I do miss The RemDawg. And I'm looking forward to seeing how Dave Roberts does in the booth with Don on the upcoming road trip.
Posted by The Omnipotent Q at 11:30 AM