A Beatdown Into First 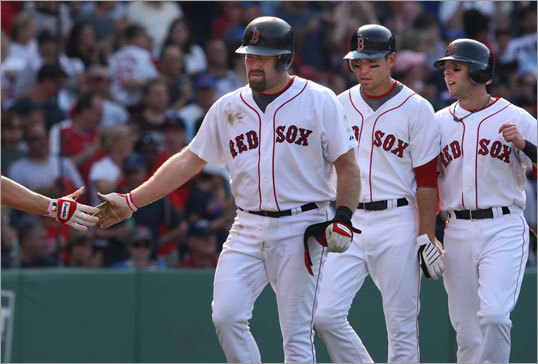 The Red Sox came from behind yesterday and salvaged the final game of the interleague series with the Mets, 12-5.

And with the Blue Jays getting swept in Atlanta yesterday, the Red Sox take over first place for the first time since last July, by a half-game.

Tim Wakefield picked up his sixth win (his first against the Mets since 1992), going six innings and allowing five runs. Not a classic win, but Wake gutted it out and the offense picked him up. Every starter had at least one hit and scored one run, except one.

It was another disasterous day for Big Papi, as he went o-for-5, striking out twice. He went o-for-12 and 7 Ks in the series, and looked bad striking out against Tim Redding, who isn't one of baseball's strike out artists. The chorus for change is now growing louder, that Papi should be dropped down in the order. And now it appears the Red Sox may finally take action on that front. Ortiz is now hitting an anemic .196.

But it was a great day for Kevin Youkilis, who hit a three-run shot that put the game away in the seventh. The previous at-bat he hit a ball out of Fenway down the left field line that was called foul. The umps went to video review but upheld their decision. There wasn't any definitive shot that showed if it was the right or wrong call. Youk wound up flying out to right, but got his revenge the next time up.

Mike Lowell also hit a three-run shot earlier in the game. J.D. Drew had four hits. Nick Green's two-run single in the sixth gave the Red Sox a 6-5 lead they would keep the rest of the way.

The Sox now head to Minnesota today for a four-game series with the Twins, and then go to Toronto and Detroit after that.
Posted by The Omnipotent Q at 10:45 AM