The Mystifying Decline of David Ortiz 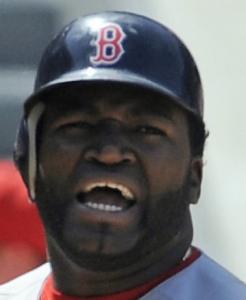 A question from yesterday's 5-4 Red Sox loss to the Angels:

In past years, Papi would have been the former and Lugo the latter.

Nope, it was the other way around on Thursday.

It was the worst day of Ortiz' career yesterday, as he made the last out in five straight at-bats and left runners everywhere. The most glaring one was in the 12th, when the Sox had the bases loaded and two outs, and tapped out meekly to end it. LA won it in the bottom of the inning.

I was on my way to a friend's house in Brooklyn for dinner and I checked on my cell that Papi had just gotten up in that situation. I turned it off before the at-bat was done, but reaction when I discovered it was (unfortunately): here comes the third out.

And I was correct. I went back a few minutes to discover the game was over. A Red Sox loss.

Let me be clear on one huge point. I LOVE David Ortiz. And I will for the rest of my life for what he accomplished in bringing the Red Sox their first championship in 86 years in 2004. In the words of Gabe Kapler in 2004, "What David Ortiz has done has been miraculous." And I will never, ever boo him at a game at Fenway, and any Red Sox fan who does should not only have their heads examined, but should be barred from Fenway Park for life.

I do not advocate benching, getting rid of, or dropping David Ortiz in the lineup. But right now he is just killing the Red Sox. The numbers are beyond brutal. No home runs since last September. 144 straight at-bats without a dinger, one at-bat short of the longest drought of his career. A .208 batting average so far this season.

I know this is killing Papi. He works hard and is sensitive to all the talk from the fans and the press. And I don't give any thought to whispers about how his struggles are due to his being "off the juice." I've never believed him to do something like steroids, and it is disquieting these days whenever a player struggles the way Papi has that the answer has to be that it's because he's not doing any kind of PEDs.

Baseball history is full of players who've had great careers who suddenly and out of a blue sky saw it decline rapidly. I always think of Steve Blass, the great Pirates righthander who went from a 15-game winner on the 1971 champions, a pitcher who finished second in the Cy Young balloting the next year to a guy whose career plummeted in 1973 and couldn't get batters out and was gone the next season. It happens in baseball. Is this happening to Papi right now? I can't answer that really, and I don't think anyone can.

I read and heard a lot of talk about how Ortiz was done over this past winter. I put no stock into it, as he missed two months last season but his numbers were still respectable, hitting 21 home runs. He is just 33, as he born just a month after the Red Sox were in the 1975 World Series. But this season, as much as I am convinced that once Papi gets that first home run, he will finally go on a tear, I am starting to wonder. Too many times, his outs have been of the "weak" variety, grounders to first and second. I noticed that he hasn't been backing outfielders in front of the wall at all often.

Terry Francona will sit Papi tonight in Seattle, if anything to clear his head and get a rest. I'm sure millions of Red Sox fans have advice for Ortiz, on how to get his famous bat rolling, but I really have none. It's sad when I see David Ortiz come to plate and my heart actually sinks, that I expect him to meekly make out.

Every Red Sox fan should give Big Papi their support as he continues through the worst slump of his major league career. Let's just hope he breaks out. And soon. Otherwise the Red Sox may have to make some painful decisions about the best clutch hitter in team history.

And NO ONE wants to see that happen.
Posted by The Omnipotent Q at 10:40 AM

I've never believed him to do something like steroidsat this point there is not a player in the game that i would suspect to be clean. you are just setting the bar to high for these players.

you just think the bad guys did it? bonds, a-rod, manny?

I got news for you fella, they were all doing it. It doesn't minimize anything any of them did. The whole game was full of it. It's a game of cheats, always has been and always will be.

It's a sad indictment of a great sport when the first thing you think of is that he must have stopped his steroid regime. Manny Ramirez was the MVP of the 2004 Red Sox WS Championship. Current facts suggest he was juiced for that. I presume the same for Ortiz, though I know it's completely unfair, it's still also probably true. I just hope that the Hall of Fame keeps all the known cheats out, at least while they are alive. An asterisk by the teams that won the World Series with a known juicer would also help put things in perspective for history.

I think Ortiz is in that group that didn't do the juice. (And I don't for a minute believe "they were all doing it." There ARE clean players.) It may have been a small minority, but the fact that Ortiz came out so vehemently against it told me he has nothing to hide and no skeletons in his closet. How many are doing PEDs now? Who knows. But I think Papi isn't one of them. Just my opinion. You can make your own judgments.

I also agree the cheats should be kept out of the HOF. Was Manny on the juice back in 2004, or at any time during his Sox tenure? My guess is we will never know.I don't think he will ever come out and admit it.