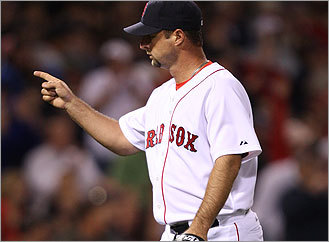 Tim Wakefield continued his astounding pitching last night, as he baffled the Toronto Blue Jays for eight innings, allowing just five hits and one run in a 2-1 Red Sox victory.

Wake got whacked in his last start in Anaheim, but gave the Red Sox some quality innings, and Jonathan Papelbon slammed the door with a 1-2-3 ninth inning.

The Red Sox got their runs in the second, as they scored runs on Jeff Bailey's single and George Kottaras' sacrifice fly.

Wake threw only one bad pitch all night, a knuckler that stayed at the top of the strike zone that old friend Kevin Millar hit inot the Monster seats for the lone Blue Jays run. It was an incredibly fast game, just 2 hours and 13 minutes (and Wake continues to make a horse's ass out of Wallace Matthews). Brian Tallet pitched a fine game for Toronto, but Wake was just that much better.

David Ortiz returned the the lineup last night, to applause all night. But it was another struggle for Papi, who went 0-for-3 with a walk and two strikeouts. It was painful to watch him flail badly at some pitches. He's now 0 for his last 17.

Kevin Youkilis returns to the lineup tonight from the DL, and Brad Penny gets the start for the Red Sox, who now trail the Jays by 2 1/2 games.
Posted by The Omnipotent Q at 12:03 PM

I may be going to a charity event next Monday where Wake, Tek, and others will be participating. I'll give more detail if it happens.

Wow, that's sounds great, Suldog. Wake and charities just seem to go together. Please do let me know if it happens...