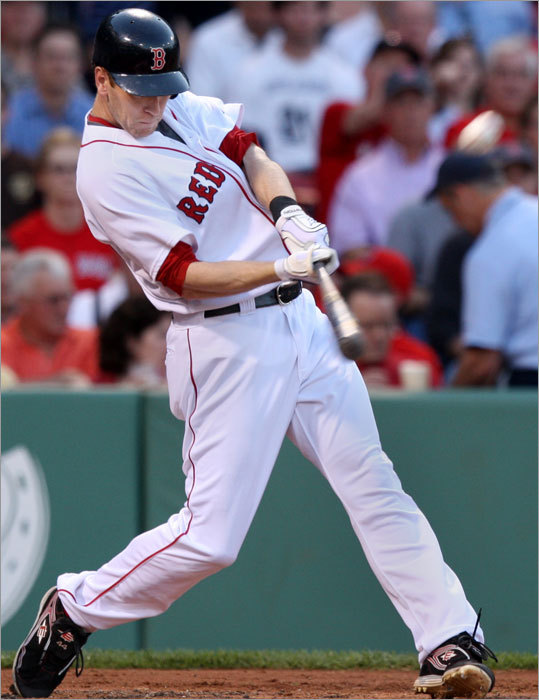 Jason Bay continued his stomping of American League pitching last night with a two-run shot in the first against the Toronto Blue Jays, and it was all the Red Sox needed in sweeping the Jays, 5-1.

The Red Sox are now just 1/2 game behind the Jays. Jon Lester was good last night, allowing just 1 run in 6 1/3 innings. He allowed eight hits and walked two, but got the job done. Ramon Ramirez and Jonathan Papelbon provided scoreless relief in getting the Sox their 15th win in their last 17 home games.

It was Bay's 13th dinger of the year, and set a new Red Sox record, an obscure one I had not heard of. It was his 11th consecutive homer with at least one man on base, and is now just one more off the MLB record. Well, that was new to me.

Toronto had been a hot team coming into Fenway, and leading the AL in most of the important offensive categories. But the combo of Tim Wakefield, Brad Penny and Jon Lester shut down their attack, allowing just four runs in their three starts. It was a very encouraging sign for the starting staff, whose ERA was at the bottom of the league coming into this series.

Now, interleague begins as the Mets come in for three. As you know, I'm not a fan of interleague, for various reasons. But Daisuke Matsuzaka comes off the DL tonight to face Johan Santana in a great matchup at the Fens.
Posted by The Omnipotent Q at 11:27 AM

Okay kids-want to start a the collection for The Jason Bay salary Drive? If The Sox keep Bay, The Manny trade was a resounding success.

The price goes up every day, but I expect to see him in a Red Sox uniform in 2010, and the forseeable future.