"Big League Dream: The Sweet Taste of Life in the Majors" 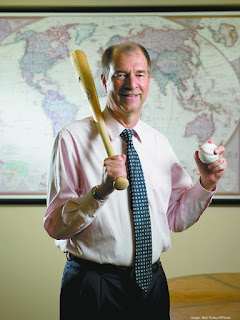 Three years ago, I read a book by a man named Roy Berger, a businessman from Long Island who grew up a passionate baseball fan. His book was called "The Most Wonderful Week of the Year", and it was all about his trials and tribulations being at a major league fantasy camp. He was a Pittsburgh Pirates fan (and a Yankees fan later in life), and chronicled the thrill of being not only at the Pirates fantasy camp, but also going to the Yankees and Detroit Tigers camps, all in a span of four years.

The book opens with a forward (which he calls a "pregame") with Bucky Dent. I seriously considered skipping it totally, and for obvious reasons. But I felt that would do a disservice to the author, so I sucked it up and read it. Dent talks about his career with the White Sox and Yankees, and of course, plenty about THAT GAME (I don't have to mention any names or dates, you know what I am talking about), and even about his brief managerial career. I got through that as fast as I could and got one with book.

I was surprised to see a familiar name on page 10 of the book, as Berger talks about his favorite moment ever in his fantasy camp career. At Yankees camp in a 10-10 tie game in the bottom of the ninth with the bases loaded, Berger stepped to the plate. He describes the scene: "I looked over at the on-deck circle and saw my camp buddy Mike Dempsey waiting his turn. I knew Mike would enjoy being the hero too much, so I'd better make something happen on my own."

I write that because Mike Dempsey is a friend of mine, and he has been at the Yankee fantasy camps for many years. He is always posting pictures on Facebook of his many adventures there in January, and I get a kick out of seeing him with so many Yankee greats of the past. Mike is also a World Trade Center survivor, and a very nice guy as well.

Mike never did get the chance to bat in that situation, as Berger singled in the game-winning run.

Berger covers a lot of ground in his interviews, and I found his time with Mike (Doc) Emrick especially fascinating. Doc is well-known as hockey's greatest announcer, but he also describes his life growing up in Indiana as a rabid baseball fan, and how he was able to swing going to Pirates fantasy camp in 2012 despite the NHL All-Star Game going on that same weekend. He also covers the career of ex-pitcher Fritz Peterson, who will forever be known as one of the pitchers who swapped wives and families with teammate Mike Kekich in 1973. As a Red Sox fan, I quite enjoyed his take on Steve (Psycho) Lyons, and what he had to say about infamously dropping his pants at Tiger Stadium in 1987. (Lyons swears it wasn't done on purpose.) One of the most moving parts of the book was with Kent Tekulve, the Pirates closer from the 1970s and 1980s. Tekulve had a heart transplant many years ago, and it saved his life. He was able to throw out the first pitch at the Pirates' playoff game that year. But he also talked about not letting the heart donor's family who he was, and the reasons why he didn't. Quite a good story.

I did find a few goofs in the book. Berger talked with legendary Dodgers' shortstop Maury Wills, and Wills talked about how much he idolized Ty Cobb, whose stolen base record he broke in 1962. But Berger talked about how Cobb "made no secret about his racial biases." That his since been debunked by Charles Leerhsen's excellent book "Ty Cobb: A Terrible Beauty" a few years ago, and I suggest Mr. Berger pick up this book and read it, and it should give him a new perspective on the Georgia Peach.

In the same chapter, he talks about Bobby Bragan, a one time Brooklyn Dodgers player from Alabama who went out of his way to racially harass Jackie Robinson when broke into MLB in 1947. Bragan later completely changed his tune on black players, and by 1958 was managing in the Dodgers' system. But Berger says Bragan was brought back the team by Branch Rickey in 1958. That would not be possible, as Rickey left the Dodgers for good eight years earlier, in 1950, after he lost a power struggle with team owner Walter O'Malley and sold his shares of the club to him.

Not to nitpick too much. I did enjoy the book overall. Berger even covers ground with the first female fantasy camp players, and that is fun to read. I certainly recommend "Big League Dreams" to any and all baseball fans who have that dream of going up against their heroes of yesteryear one of these days. You may have to pay a pretty penny for the privilege, but Roy Berger believes it is worth every cent.
Posted by The Omnipotent Q at 3:51 PM