"Characters From The Diamond"

In recent years I have become more and more fascinated by old time baseball. I've read many books from the Deadball Era, which was baseball as it was played before it was revolutionized by Babe Ruth and the home run ball. It is generally assumed that the Deadball Era ended in 1920.

If you like stories from that bygone era, especially from the screwballs who were everywhere in baseball, you may want to pick up "Characters From the Diamond," by Ronald T. Waldo. The author writes about not just the stars of the era like Ty Cobb, Babe Ruth and John McGraw, but lesser known players who didn't leave a lasting mark on the game, but for their wild and crazy antics they will be remembered. 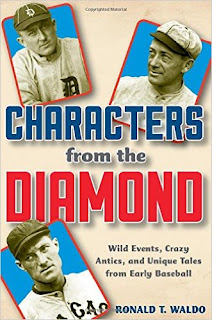 You couldn't have a book like this without paying homage to the legendary Rube Waddell, the Philadelphia A's and St. Louis Browns hurler who was famous for chasing fire trucks from the mound. He's one of my favorite early 20th century baseball characters, and Mr. Waldo does him justice here.

There's a whole cast of characters you'll get to know and love (and even hate) in the book. From Fred Merkle's infamous boner in 1908, Rube Marquard's success in the early 1910s (and why he wanted his famous winning streak of 1912 to end), to the sad story of infielder Eddie Grant, who enlisted in World War I and was killed in combat.

You'll find plenty to like in Mr. Waldo's book. Baseball attracted a lot of colorful figures in the olden days, and a lot of their hijinx settled around liquor, gambling, women and sheer boredom. And it's not just the players covered in the book, as we hear of stories of umpires, minor leaguers you've never heard of, owners and some fans as well.

You probably have never heard of players like Arthur Evans, Mike Donlin or Ping Bodie. But they come alive in "Characters From the Diamond." They'll never be in the Hall of Fame, but Mr. Waldo has immortalized many of these ballplayers in his book.

"Characters From the Diamond" was released this past March by Rowman & Littlefield Books.
Posted by The Omnipotent Q at 11:40 AM