A Good Day For The Nation Yesterday 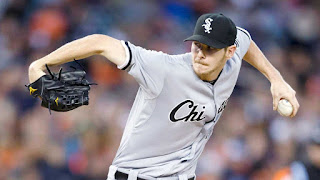 Yesterday was a very good day to be a Red Sox fan.

Dave Dombrowski pulled off three major transactions. He traded with the Brewers for reliever Tyler Thornburg, and later in the day signed former Texas 1B/DH Mitch Moreland to a one-year deal. And in-between, he shook the baseball world by trading for one of MLB's best pitchers, Chris Sale.

Rumors were rampant Sale was heading to Washington in a blockbuster deal. But yesterday afternoon, the Sox announced they had acquired the lefty from the White Sox for two of the Red Sox' highly coveted prospects, Yoan Moncada and Michael Kopech. They also received infielder Luis Alexander Basabe and pitcher Victor Diaz.

The Sox also shipped Travis Shaw and two prospects to Milwaukee for reliever Tyler Thornburg, who figures to be used as an eight-inning guy for Craig Kimbrel. Trading Travis Shaw tells me the Red Sox think Pablo Sandoval will be a major contributor at third base next season. He supposedly in good shape, and coming along well from his shoulder surgery, as well as totally untradeable right now, so we'll see about that.

According to my friend and Red Sox devotee Mike Kinosian, the Red Sox have traded 18 prospects over the course of the last 12 months in deals involving such players as Craig Kimbrel, Drew Pomeranz, Aaron Hill, Brad Ziegler and Carson Smith. They have had a deep farm system, and Dombrowski is using it to win right now. As he should.

Fans are woriied about the Sox trading such stud prospects as Moncada and Kopech. Could they end up being superstars? Of course, and it has happened to the Sox in recent years (see Anthony Rizzo). But most prospects don't end up being big time players. Anyone remember the write-ups that Anthony Ranaudo (now playing in Japan), Lars Anderson and Casey Kelly got?

And please keep in mind the Sox did NOT trade Jackie Bradley, who the White Sox really coveted, or any other player from their 2016 MLB roster. And they did not trade Rafael Devers, Andrew Benintendi, Jason Groome or Sam Travis. Dombrowski didn't gut the farm system yesterday. He saw needs the Sox had, and went for it. And I'm really glad he did.

Sale is under the Red Sox control for the next three years, the last two being team options worth a total of $26 million. Not bad for one of the MLB's best hurlers. (Considering David Price will make that and $4 million ALONE next season.)

We'll see down the road if anyone traded yesterday becomes one of MLB's elite players. But that will be years from now. The Sox want to win it all in 2017, and should the fans they are dead serious about dominating next year. It was indeed a good day yesterday.
Posted by The Omnipotent Q at 10:52 AM