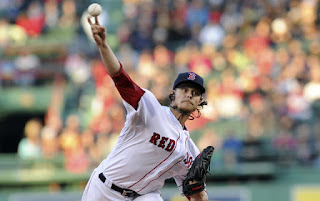 With little fanfare, the Red Sox shipped Clay Buchholz out of town yesterday, and he's headed to the Phillies for minor league second baseman Josh Tobias.

He'll be longed remembered by Red Sox fans for his 2007 no-hitter against the Orioles at Fenway in just his second MLB start. And he was part of two World Series championship teams in 2007 and 2013.

He'll also be remembered for absolutely frustrating the hell out of Red Sox fans. It seems like he was hurt every season, and would go through stretches when it seemed like he was pitching batting practice.

Yesterday's deal was really just a salary dump. The Sox picked up his option for $13.5 million for 2017, and now found themselves with seven starting pitchers. Somebody had to go, and Buchholz was the logical choice. The Phillies will pick up the entire option. Whether Tobias turns out to be anything remains to be seen, as he played at high Single A last season.

We all know Buchholz struggled mightily last season, and banished to the pen in June. Sox fans would have traded him for a used ball bag then. He pitched better in the second half, and even pitched decently in Game 3 of the ALDS against the Indians.

Steve Buckley in today's Boston Herald points out a mind-blowing fact about Buchholz: He played in Boston longer than such Sox greats as Pedro Martinez, Nomar Garciaparra, Manny Ramirez and Fred Lynn.

He certainly won't be remembered as one.

I suspect when most Sox fans think of him years from now, they'll think of a pitcher who should have better than what his final Red Sox stats show: 81-61 and a 3.96 ERA. He was an All-Star in 2010 and 2013, but won just 10 more games three times in nine full seasons.

But we maybe seeing him up close again in 2017, as the Red Sox play the Phillies in a four-game series starting on June 12th.

And with his departure (and the departures of David Ortiz and Junichi Tazawa this winter), Dustin Pedroia is the final player left on the Sox from the infamous 2011 September collapse.

I wish Clay well. Thanks for being a part of two championship teams in Boston.
Posted by The Omnipotent Q at 10:38 AM