The Sox In San Diego 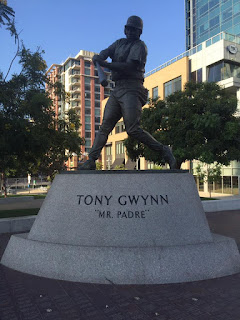 I had the pleasure last week of visiting the incredibly beautiful city of San Diego, and it's the third time I've been there.

Of course, I had a great reason for going there, as the Red Sox were playing a three-game series against the Padres. I have two dear friends who live in the city, Peggy and Ken Gartin. As soon as the 2016 schedule was set in stone, Peggy contacted me and said that the Sox would be playing in her hometown, so come on out!

I have been in San Diego twice before, in 2004 (when Peggy and Ken got married) and in 2007, the last time the Red Sox were in town. I think we know how both of those seasons concluded, don't we?

Anyway, Peggy and Ken were wonderful hosts, and they showed me around San Diego, which included a tour of beautiful Balboa Park. We also drove up to Los Angeles to catch the Padres play the Dodgers at Dodger Stadium. It was my first time in LA, and I have to admit the park is very nice. (And the stereotype of the typical Dodger is true: they arrive late and leave early. I saw it for myself.)

Back in San Diego, we saw the Tony Gwynn Museum, which contains all sorts of Tony's accolades from his brilliant career, such as his bats, Gold Gloves, Silver Sluggers, and many other incredible trophies and memorabilia he accumulated. (Unfortunately, there was no photography permitted, as asked for by the Gwynn family.) He is truly a revered figure in San Diego, at almost godlike status. (The above picture is the statue of him at Petco Park, which is stunning to see up close.)

Petco Park is truly a jewel of a ballpark. Everyone is very nice who works there, and the park is almost immaculate. Ken and I arrived for batting practice all three days, and I met many of his friends who came out for the series. It's been another tough year for the Padres, now on their sixth straight losing season. I felt badly for the good folks I met, as they support their team passionately. The Friars are still looking for that elusive first championship, and it brings back memories of those years supporting the Red Sox during their mediocre-to-lousy years, just hoping to see one in my lifetime. (I have also adopted the Padres as "my favorite team west of the Mississippi.")

The Padres won the first game of the series, 2-1, as Edwin Jackson outpitched Drew Pomeranz. Ken and I walked back to his house after the game, and we saw some homeless guys on the street. One guy looked at me and saw I was a bit down and said, "Don't worry, they (The Red Sox) will will the next two games." I had to smile at that, and as it turned out, maybe that fella knew something I didn't at the time.

The Sox did indeed win the next two, both handily by scores of 5-1 and 7-2. The Sox supporters came to San Diego like it was an invasion, and the park had at least 60% Sox fans all three days. There was a sense of good sportsmanship through the crowd, and certainly no fights of any kind.

If I were to ever live in California, I would pick San Diego in a heartbeat. Great climate and wonderful people. And I do hope the good fans there will one day experience a World Series championship.

I know Tony Gwynn would be smiling, wherever he is right now.
Posted by The Omnipotent Q at 4:43 PM