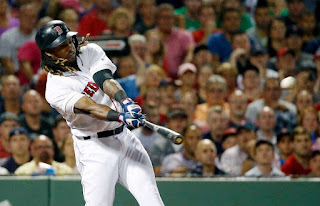 Last Thursday, the New York Yankees came into Fenway Park four games behind the Red Sox in the AL East race. And naturally, more than one pundit had to bring up that four game disaster of 1978, when New York came into Fenway and took four straight from the Sox and left tied in the division.

That, of course, is ancient history. Hanley Ramirez made sure there would be no repeat of that.

Hanley was a one-man Yankee Wrecking Machine, as he hit four home runs and drove in nine runs, as the Sox all but ended New York's chances of winning the division.

His first blast was the soul crusher, as the Yankees were one out away from winning the first game on Thursday, and had a four-run lead as late as the 8th inning. A win would have put them three games back, but Hanley's three-run blast in the center field bleachers gave the Sox an amazing 7-5 win.

Home run number two was on Friday, another bleacher shot to center field that put the Sox up 3-0 on Friday, and they coasted to a 7-4 win.

Ramirez hit the last two on Sunday night. The first brought the Sox back from 4-0, another three-run blast off the light tower in left. At that moment, I knew the Sox were on their way to a series sweep. After the game was tied, Hanley became the difference in the game in the bottom of the seventh, a bomb onto Lansdowne Street to make it the eventual final at 5-4.

The Sox had lost two of three to Baltimore coming into the series, and I was hoping they could take three. They won the four games despite having two of their starters not get past the fourth inning (Eduardo Rodriguez on Thursday and Drew Pomeranz on Sunday). The bullpen picked them up on both nights (who would have thought it now appears to be a strength), and the offense bailed both pitchers out as well.

The Red Sox are showing that no quit attitude in September with three come-from-behind wins against their archrivals. They wre down in three of the four games by three or more runs and came back to win. They now have a three game lead over second place Baltimore, and a four game lead over Toronto. The Magic Number to win the AL East is now 11.

For New York, it was a devastating weekend. It was series they could have won all four games, but blew three late leads to allow the Red Sox to take charge and win. They are four games behind Toronto for the final Wild Card spot, with three teams (Detroit, Seattle and Houston) in front of them. Dosn't look good for the Yankees. Their elimination number is 10.

It was a sensational weekend for the Red Sox, and now they head to Baltimore for four games. This four-game series win over New York may not be an historic one (I still like the sound of "Boston Massacre 2016" nevertheless), but quite satisfying nonetheless.
Posted by The Omnipotent Q at 5:12 PM