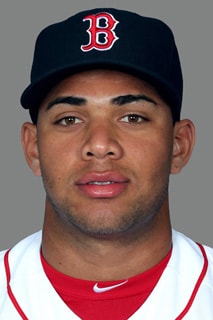 The Red Sox closed out the month of August at 17-13, and find themselves in second place as September begins.

They split the last six games at home against Kansas City and Tampa Bay, and got really lucky yesterday, as the offense bailed out yet another loopy bullpen decision by John Farrell. (PLEASE, PLEASE, PLEASE do not use Junichi Tazawa in any high-leverage situation again. I'd rather see the ball boy coming in to pitch.)

The Sox are two games in behind AL East leaders Toronto, and lead the first Wild Card position by two games over Baltimore.

There's so much to like with this team, and we will now get to see young stud infielder Yoan Moncada, as he was recalled from AA Portland today, to play third base, which has turned into a black hole. Travis Shaw and Aaron Hill are struggling, so Moncada will get a chance to see if he can light a spark at the position. He'll join the club in Oakland on Friday night.

The starting pitchers had an overall solid month of August. Rick Porcello now has 18 wins, and is 13-0 at Fenway this season. The last Sox hurler to do that was Boo Ferriss in 1946. Porcello has turned into a reliable stopper of losing streaks. David Price continues to pitch strong, as he's won his last four decisions and he now stands at 13-8 with an ERA finally under 4.00 (3.97). Drew Pomeranz continues to impress. His last two starts against Tampa Bay were excellent, except for throwing a hanging curve to their backup catcher Luke Maile last Tuesday. He has a no-decision and a loss to show for it unfortunately, but he's become more reliable as he's gone on. Steven Wright has been a concern since returning from the DL. Yesterday he allowed four runs and four innings, and his knuckler was too flat too often. You have to wonder if he's hit a wall after his early season success (think Tim Wakefield in 1995).

The bullpen may still be this team's downfall. The only truly consistent pitcher in August was Craig Kimbrel, who has been terrific since coming off the DL early in August. (And manager Farrell, please let get a four-out save in important games.) Matt Barnes is wildly erratic, getting lit up last Sunday without getting an out. Brad Ziegler should be the eighth inning guy, no matter what. He's the Sox' most reliable bridge to Kimbrel.

The offense has its share of strugglers, with Jackie Bradley and Travis Shaw at the top of the list. Bradley went deep yesterday, but Shaw struck out four times on Wednesday, and found himself on the bench yesterday. Here's where the call up of Moncada is important. When the Sox brought up Andrew Benintendi in August, he immediately brought a spark to the bottom of the lineup. All eyes will be on Moncada, but the 21-year-old from Cuba has a rep for handling tough situations he's been in. It's the perfect time to bring him up.

I'll get a chance to see him play live, as I'll be in San Diego next week for the three-game series the Sox are playing with the Padres starting on Labor Day. I'll have a post about it after I return to New York on September 8th.

The Sox now embark on another long trip, three cities in nine days: Oakland, San Diego, and really big series in Toronto. The Sox return to Fenway on September 12th against Baltimore. Five wins away from the Fens should be a must right now.
Posted by The Omnipotent Q at 11:58 AM