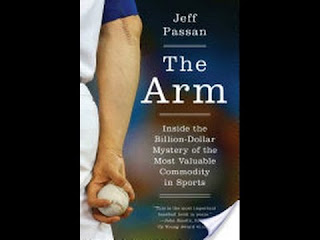 A new book was just published by sportswriter Jeff Passan on a very serious subject in baseball. It's called "The Arm: Inside the Billion-Dollar Mystery of the Most Valuable Commodity in Sports", and it takes a long hard look at the arm injuries suffered by pitchers, especially the explosion in the number of Tommy John surgeries performed in recent years. Not just on MLB pitchers, but going all the way down to youngsters in high school.

The book is centered on two MLB pitchers, Daniel Hudson and Todd Coffey, and their struggles to make it back from Tommy John surgery, and in Hudson's case, multiple surgeries. It follows the pitchers' lives as they recover, and shows a very human side that most fans never think about.

The book goes into the history of the surgery, from Tommy John's injury in 1974 that was thought to have ended his career, to Dr. Frank Jobe's groundbreaking surgery and the particulars of how it changed baseball forever.

Passan points out that MLB teams spend $1.5 billion on pitchers every year, and nearly a third of that is lost to injury every year. Just about of those pitchers spend time on the disabled list.

Tommy John surgeries have become more and more frequent over the years, almost to the point it has become routine in baseball. But its frequency has become dangerously high, and it is now estimated that 56% of all the surgeries take place on teenagers. It has become an epidemic.

Passan also takes his readers into the world of youth baseball, both in the United States and Japan. They appear to be the major culprits in future Tommy John surgeries, as many of these kid pitchers are pitching year-round. Better regulation of that industry appears to be a possible solution, but the ways to do it are not entirely clear, as there are multi-million contracts to be won by the best pitching prospects.

It's truly a crisis in baseball as Passan points out. Pitchers are throwing harder and harder, and at younger and younger ages. But no matter what solutions become popular (like pitch counts, limiting starts and innings), it will always be a problem, as the arm was not designed for long term baseball throwing.

"The Arm" is a terrific read, and should be mandatory for youngsters seeking a career as a pitcher (and those with a vested interest in them) to check this book out.
Posted by The Omnipotent Q at 11:37 AM