My Sixth Opener at Fenway 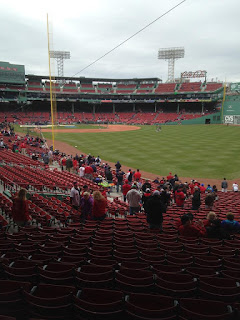 I had a great time at Fenway Park yesterday for my sixth Opening Day game there with the BLOHARDS, the New York City-based Red Sox fan group I am proud to be a part of.

We went up in two buses, 110 of us, and sat in the right field grandstand in section 3. We were in fair territory, but we way up the grandstand, where no player could reach us with a home run.

The pregame ceremonies were very well done, which included a member of each of Boston's championship teams over the years: Ty Law of the Patriots, Bill Russell of the Celtics, Bobby Orr of the Bruins, and the man who was the focus of yesterday's ceremonies: David Ortiz.

The full season goodbye to Big Papi was on full display, as he got ovations throughout the day, especially in his first at-bat. But we were all surprised when his 15-tear-old daughter Alex came out and sang the National Anthem, and she did a magnificent job with her. She has quite a set of pipes for a young girl, and her dad looked like he was going to break down after she finished.

The Red Sox opened their first home game of 2016 with four singles off the Orioles' Yovani Gallardo, and it looked like the Sox were on their way, scoring three times. But David Price ran into all kinds of a trouble in the third, including a walk and hit batsman, and Mark Trumbo hit a three-run bomb to center, and the Sox were down 5-3.

The Sox tied it at 5 in the fourth on Jackie Bradley's double and an RBI groundout.

It was 6-6 in the ninth when Craig Kimbrel walked two batters and with two outs, Chris David hit a bomb into the centerfield bleachers to make it 9-6. (From my perspective I thought it was a long out, but when I saw Bradley turning around and looking up I knew it was big trouble.)

The Red Sox rallied for a run in the ninth (a Mookie Betts blast in the Monster seats), and had first and second with no outs and David Ortiz up. Here's the Hollywood ending for this Opening Day. "Just don't hit it on the ground" I thought to myself. And he hits it on the ground and Baltimore turns a DP. Hanley Ramirez struck out to end it.

A long bus ride back to New York followed, but I was still glad to go to the Palace of Baseball on Monday.
Posted by The Omnipotent Q at 12:36 PM