The 2016 Season/Retirement Tour Starts With a Bang 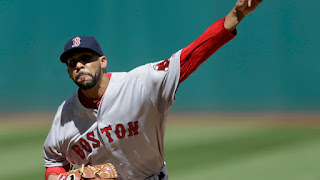 The Red Sox need a fast start to the 2016 season, as every critic known to mankind kept harping on throughout the spring. They got a very good start to it yesterday.

With the temperatures at 34 degrees in Cleveland yesterday, and after the game was called off on Monday, the Red Sox and Indians sucked it up and went out there, with a brilliant matchup of aces: David Price and Corey Kluber taking the hill.

Price was brilliant in his Red Sox debut for six innings, allowing the Tribe two runs, striking out ten. The Red Sox struck first, with Mookie Betts going deep in the third inning with one on. The Indians tied the game in the fourth at 2-2, but the Sox went ahead to stay in the sixth, on an RBI single by Brock Holt and Travis Shaw scoring on a wild pitch.

The bullpen was stellar. Junichi Tazawa and Koji Uehara pitched perfect seventh and eighth innings, and Craig Kimbrel allowed just a two-out walk in the ninth. It would have been a save situation, but the Sox expanded their lead in the ninth.

That was due to David Ortiz. Papi unloaded a two-run bomb to right field to get the Retirement Tour off with a bang. It was his fifth Opening Day home run, the most of any current player in MLB.

The combination of Xander Bogaerts and Dustin Pedroia, the two hitters in front of Ortiz, went 0-for-9 on the day, but Papi, Travis Shaw, Hanley Ramirez, Holt and Betts each had two hits apiece.

One thing players on both teams seemed in agreement with was the truly horrific strike zone home plate ump John Hirshbeck had. Players were barking at him all day, calling both inside and outside pitches strikes, and clearly missing some calls at the top and bottom of the zone.

Anyway, it was a good day for the Sox, and the three-game series with the Indians continues tonight and tomorrow night, both 6:05 PM starts. Clay Buchholz will try not to get hurt tonight, and Joe Kelly gets the nod on Thursday.
Posted by The Omnipotent Q at 11:13 AM