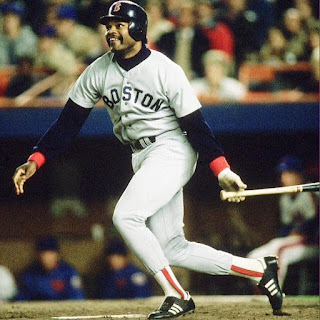 I was terribly saddened to learn that 1986 Red Sox hero Dave Henderson died on Sunday at the age of 57.

He will be remembered by me forever for the two-out, two-strike blast he hit off the Angels' Donnie Moore in Game 5 of the 1986 ALCS in Anaheim to give the Red Sox the lead, 6-5, and eventually drove in the game-winning run in the 11th inning to send the Sox on their way to the AL pennant. (He actually would have been a goat had the Red Sox lost Game 5. Totally forgotten is the ball that went off his glove hit by Bobby Grich in the 6th inning for a two-run home run that put the Angels ahead. Remember that?)

And who could forget the blast that started the top of the 10th inning at Shea Stadium in the World Series against the Mets in Game 6 of the World Series? (It's pictured above.) Had the Sox held on and won a statue surely would have been erected for Hendu in front of Fenway Park.

I was in the same place for both events: working at Tower Records in Greenwich Village, and I went crazy both times. Both are memories I will cherish forever (the first more than the second, obviously). And by an amazing coincidence, I was in store DJ booth for both blasts. (I was just turning the TVs back on after midnight after all the customers left the store, and saw Hendu's blast hit above the left field wall.)

Dave Henderson was traded by the Red Sox in 1987, and wound up winning a World Series in Oakland in 1989. He hit 25 home runs and made the All-Star team for the AL in 1991, and retired after playing in Kansas City in 1994. But he will always be remembered in Boston for his wide smile and joy for the game. And for two blasts that nearly brought the Red Sox and their fans to the Promised Land in 1986.

What I never realized was the Dave Henderson had a disabled son, and it was the biggest priority of his life for the last 28 years. He was profiled last year about it in the San Jose Mercury News.

Hendu suffered a massive heart attack yesterday, just one month after receiving a kidney transplant. My deepest sympathies to friends and family. He will be missed, and fondly remembered by Red Sox fans for his 1986 postseason heroics forever.