A Heavy Price For an Ace 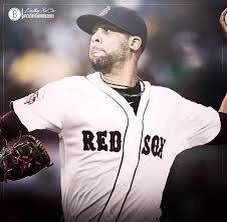 I would call this making a big splash, no?

Dave Dombrowski promised that the Red Sox would bring in a top starting pitching, and probably via free agency. And that's what he did, as the Sox agreed to a seven-year, $217 million deal with free agent David Price.

This is the biggest deal in baseball history ever given to a pitcher.

Rumors were flying yesterday that Price would land in St. Louis, and the Sox had started negotiating with free agent Zack Greinke. But it was apparent that Price was their man, and the Red Sox offer was $30 million more than what the Cardinals were offering.

In this megadeal, there is an opt-out clause for Price after three years. Price is 6-1 with a 1.95 ERA in 76 innings at Fenway Park lifetime.

It was quite apparent to anyone with eyes that the Red Sox needed a top draw starter for their rotation. This reminds me of December 1997, when the Sox were coming off a year when they had no clear ace of the pitching staff, and finished the year 78-84 (just like in 2015). So they traded for Pedro Martinez. While Pedro was four years younger than David Price, it made all the difference in the world as the Sox won the Wild Card in 1998. This move also takes the heat off Rick Porcello to be the ace, and can now move to the number two slot.

Yesterday's signing also proves what a big mistake the Sox made in lowballing Jon Lester in contract negotiations in 2014. Price is actually a year younger than Lester is now. They would have been overpaying Lester had they resigned him then, so overpaying Price is something they would had to have done anyway. While the Sox spent a truckload of money yesterday, they lost no draft picks in the signing, and get an ace without touching the core of their young players.

Dombrowski said after the 2015 season ended that there were three slots he had to fill this offseason: an ace (Price), a closer (Craig Kimbrel) and a fourth outfielder (Chris Young). He's done alright so far, but you have to think he is not yet finished. Another power arm in the pen maybe next, and trying to find a new home for Hanley Ramirez may also be a possibility. The Winter Meetings begin next Monday in Nashville.
Posted by The Omnipotent Q at 10:40 AM