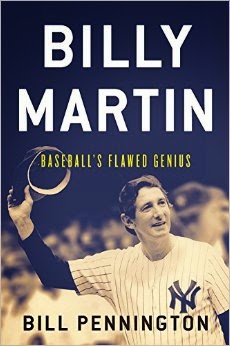 As you all know, I am not a fan of the New York Yankees. But I was recently offered the chance to read a new book about the legendary manager Billy Martin, and I decided to give it a chance. It's called "Billy Martin: Baseball's Flawed Genius" by sportswriter Bill Pennington.

It's the story of a complex man, who was best known for taking baseball teams and improving them and his legendary dustups with umpires. But he was far more than that. He led quite the colorful life, both on and off the field.

The book takes the reader back to Martin's days growing up in West Berkeley, California, and his eventual forays into organized baseball, and his relationship with Oakland Oaks and future Yankees manager Casey Stengel. Baseball was clearly Billy Martin's most important thing in life, even more than his family life.

But the book also highlights Martin away from the bright lights, delving into his religious faith. Billy was a devout Catholic. When he won the award for the 1953 World Series MVP, he was awarded a new car, a Cadillac. He very quietly gave the car to his local parish priest in West Berkeley, Father Dennis Moore, who had helped his family when they were struggling financially when he was growing up. He also spent many hours in church, looking above for guidance.

Pennington also portrays a man who was fascinated by history, and talked for hours on end with writers about subjects like the Civil War. But he also shows a man who had his demons, and alcoholism plays a very heavy role in the life of Billy Martin.

He also goes into great detail about some of the legendary incidents that Martin will forever be known for, such as the legendary fight at Copacabana in 1957 that eventually got him traded, his dugout confrontation with Reggie Jackson at Fenway Park in 1977, the fight in Baltimore with pitcher Ed Whitson in 1985 (that was especially interesting with all the minute details Pennington gives the reader), and many others.

No book about Billy Martin would be complete without a detailed description of his complex relationship with Yankees owner George Steinbrenner. I thought Steinbrenner came off more sympathetic than anything else in this book. He hired/fired Billy 5 times, and had genuine affection for him. Steinbrenner was, of course, a paranoid blowhard, treated many employees like crap, but he is presented here more of a friend who cared for Billy. I suppose you could write a whole book just on their relationship alone, but that's for someone else to do.

Billy Martin clearly loved the limelight, and being a celebrity. He is also shown to be generous with people, such as giving outrageously high tips to regular people. But towards the end of his life, he is portrayed as a man looking for peace in his life. He had been through four marriages, and had settled outside of Binghamton, New York. But the old devil drink came back, after he had given it up for a while. And it would play a prominent role in the accident that caused his death on Christmas Day of 1989.

Martin was indeed a complex individual, and this new book takes us on a journey with this man, who 25 years after his sudden passing has been overlooked by many in the subject of MLB's best managers. "Billy Martin: Baseball's Flawed Genius" is definitely worth your time to read, whether he played for or managed your favorite team or not.
Posted by The Omnipotent Q at 10:57 AM