One Writer Thought Neither Tito Nor Farrell Merited a Vote 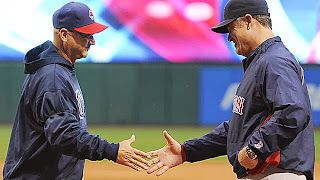 There were a lot of Red Sox fans angry yesterday when John Farrell was NOT named AL Manager of the Year for 2013.

I wasn't one of them.

You can make a strong case for either Farrell or Francona winning. Both turned around franchises that won less than 70 games in 2012 (Red Sox won 69, Indians won 68). The Sox won 28 games more than last year, while the Indians won 24 more than 2012, a franchise turn around record.

Neither team was picked by the "experts" to be within shouting distance of the playoffs. You can make more of a case for Francona, as he was working with less talent than Farrell was, and got them to the AL Wild Card playoff game.

And we all know what Farrell did with the Red Sox this year. I'm sure he's happy with what he and his club won on October 30th. I thought Farrell would be a slam dunk back in September. But the more I thought of the job Tito did in Cleveland, the more I thought he could win it, and ultimately did. Congratulations to him, and it's the first time he's won the award. (Nope, despite the two World Series wins in Boston, he didn't win it there.)

But in looking at the vote, I noticed something really strange.

Francona received 16 first place votes, 10 for second and 2 for third.

Farrell received 12 first place votes, 10 for second, and 6 for third.

Since there were 30 writers casting ballots, that means that both Farrell and Francona were left off TWO ballots each. (Writers voted for top three.)

What baseball season were these guys watching in 2013? You can make a strong case for either Farrell or Francona winning (Farrell was my choice), but you can't make one for leaving either manager off the ballot. As it turns out, one writer left them both off.

This sure doesn't improve my opinion of sportswriters. But then again, probably nothing ever will.
Posted by The Omnipotent Q at 11:08 AM

I always thought that if you don't have the eventual winner listed on your ballot, your vote should be taken away. Obviously you're clueless.