Good To Have You Back Where You Belong 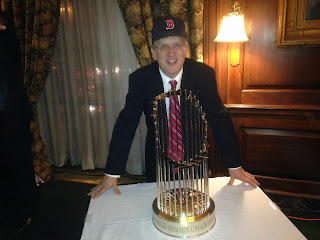 This never gets old. Ever.

Last night, I was with my good friends from The BLOHARDS, the New York-based fan group of Red Sox fans, and we gathered together as the 2013 World Series Trophy was brought in and we all took pictures with the hardware. It was at the upscale Union League Club, so everyone had to dress appropriately. (Yours Truly was in the monkey suit.) I had previously posed with the Sox Trophies in 2004 and 2007.

Dr. Charles Steinberg of the Red Sox front office was on hand and chatted for a few minutes about the team and took questions from the crowd, which numbered about 150. Red Sox PA announcer Dick Flavin was on hand to do some Red Sox-themed poems, and was really amazing. My pal Chris Wertz gave a speech about the state of the New York Union (and it is good). And I did Red Sox World Series Trivia, and my good friend John Pizzarelli gave out prizes to the winners.

Here are the five questions I did, and the answers will be at the end of this post: 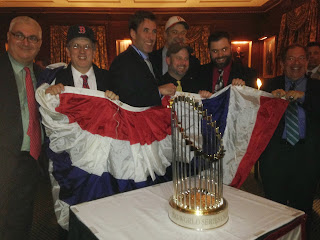 This is a picture of me (second from left) with a number of the BLOHARDS, including Joe Cosgriff (far left), my pals Chris (next to me), Matt and Adam, and Dr. Charles Steinberg (on the far right). It includes bunting from Busch Stadium and the 2004 World Series. A great time was had by all.