It Wasn't a Dream. It Really Happened. 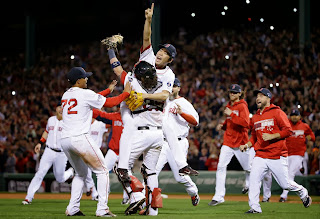 It has now been exactly one month since the Red Sox won their third World Series in ten years. And 30 days on, I'm still trying to wrap myself around the fact they they actually did it.

On the night of September 28, 2011, a darkness fell over Red Sox fans everywhere. An excruciating one month collapse that saw the Sox miss the playoffs by one game, from a team that everyone and his brother-in-law said would go all the way. Heads rolled, and management made some godawful decisions that turned the 2012 season into a complete and total nightmare.

Generally when teams have a September collapse, it lingers far longer than just the season after. For example, the Philadelphia Phillies authored the worst collapse in baseball history in 1964, blowing a 6 1/2 game lead with 12 to play. And it took them 12 years to recover, not getting to the postseason until 1976, when they won the NL East. And they were not a contender in any of those intervening years.

The Mets had one of the worst collapses ever in 2007, losing a seven-game lead with 17 games to play. They still haven't recovered from it, and have had 5 straight losing seasons and counting.

The point is: late-season collapses generally means the team is on the road downward.

When Bobby Valentine's Reign of Terror ended after the 2012 season, I really didn't think the Red Sox fit into the above mold. Too many things went wrong that year (not all Valentine's making, of course), but there was too much talent in Boston for the Red Sox to consider "the nuclear option" (in this case, blowing up the team and starting over from scratch). The day they made that historic trade with the Dodgers and got rid of the clubhouse lawyers, I thought right there and then the Sox were on the road back. (I couldn't help but wonder what Beckett, Crawford and Gonzalez were thinking the night of October 30.)

I had a good feeling watching the press conference that introduced John Farrell as the new Red Sox manager in October 2012. He was exactly what the team needed: a respected man who knew many of the players and organization, a guy who lets the players play, stays out of the way and brings NO drama to the scene.

GM Ben Cherington made a conscious attempt to bring in "good character" guys and many a writer questioned a few of the moves he made. Signing Jonny Gomes brought a collective yawn from most Red Sox fans. A few thought Shane Victorino was past his prime and giving him a three-year deal was foolish. Stephen Drew was a late signing, and bringing in Mike Napoli seemed to take forever, with his hip problems. And absolutely no one noticed when Koji Uehara was signed from Texas.

Few of the so-called experts picked the Red Sox to finish higher than third. Many picked a second straight last-place finish. I actually picked them second (behind Toronto, oops), winning 90 and getting a Wild Card berth. And I thought I was being wildly optimistic.

I still shake my head over it. I simply could never have imagined seeing the Red Sox hoist up the 2013 World Series trophy before the year began. From the aftermath of the Boston Marathon bombing in April, it all unfolded into one of the best baseball stories in a long time.

The Red Sox buried 2011 for good.  The future looks very bright with Xander Bogaerts, Jackie Bradley, Allen Webster and host of other young players on the horizon. They have a host of tough decisions to make this winter.

But when people I haven't seen in a long time come up to me and ask me how I'm doing, I usually reply, "Still basking in the afterglow of another Red Sox World Series championship."

And just 125 days until another World Series championship flag flies again at The Fens.