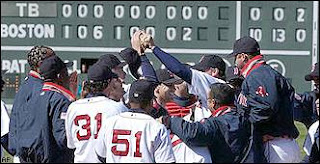 Another One of the 25 has called it a career, as Derek Lowe officially retired this week, after 17 seasons in MLB.

I had the pleasure of being at Fenway for his no-hitter over Tampa Bay on April 27, 2002. I will never forget how electric Fenway Park was for that ninth inning, which included a great grab in center field by Rickey Henderson. (Remember him in a Red Sox uniform?) The park just exploded when the last out was made. It was one of my favorite memories in any baseball park.

Lowe will forever be remembered by Sox fans as the first pitcher to ever win the clinching game in all three postseason series. He won in relief to wrap up the ALDS (when David Ortiz won it with a home run in the tenth inning), pitched six brilliant innings in Game 7 of the ALCS to wrap up the greatest postseason comeback of all-time, and pitched seven equally terrific innings in Game 4 of the World Series.

And of course, how could you forget he was part of one of the best trades in Red Sox history, coming from Seattle with Jason Varitek for the infamous Heathcliffe Slocumb in July 1997?

He was released by the Texas Rangers earlier this season.

Lowe's retirement means there are only three players from The 25 of 2004 still active in MLB: David Ortiz, Kevin Youkilis and Bronson Arroyo.