First Of Many More Wins To Come 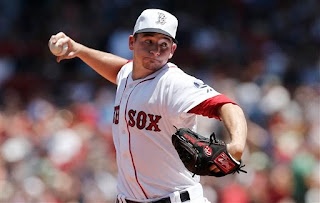 Congratulations to Allen Webster on his first MLB victory yesterday at Fenway in the Red Sox 8-2 win over the Padres, completing a sweep. It was a memorable one for him, as he got it on the 4th of July, and the first of many more to come. He's got "stud starter" written all over him.

The Red Sox took 8 of 9 on the just-completed homestand over Colorado, Toronto and San Diego, and now head out west for the first time, with 10 games in Anaheim, Seattle and Oakland. They leave Boston up by 4 1/2 games over Baltimore, 6 over New York, and 6 1/2 over Tampa Bay.

The Sox also have the AL's best record at 53-34, and just a half-game behind the Pittsburgh Pirates for MLB's best record. (The Pirates have the best record?)
Posted by The Omnipotent Q at 11:21 AM