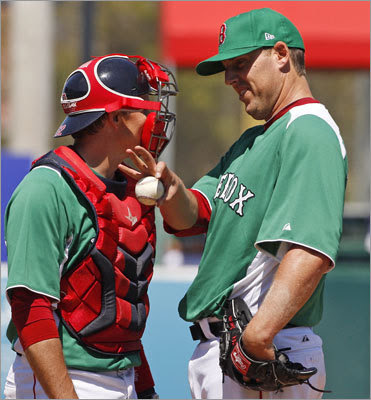 A bit of a surprise that John Lackey was picked as the number two starter in the Red Sox rotation by Terry Francona. That also means he will pitch the opener at Fenway Park on April 8th against the Yankees.

Jon Lester is the ace, followed by Lackey, Clay Buchholz, Josh Beckett (with a lot to prove in 2011) and Daisuke Matsuzaka.

That rotation means Tim Wakefield's in the bullpen (and that assuming he's on the roster at all, but I would bet he will be).

And speaking of the pen, Jonathan Papelbon got lit up by the Mets in the ninth inning yesterday, giving up four earned runs. You don't get excited either way about spring training results, but it's been a miserable spring for Paps. His ERA is 12.60 so far. (7 earned runs in five innings.)

I still believe no matter what happens in 2011, we are seeing Papelbon's final season in Boston.

The Red Sox also cut their roster down by optioning 1B Lars Anderson, C Luis Exposito, SS Jose Iglesias, and infielder Yamaico Navarro to AAA Pawtucket. OF Juan Carlos Linares was reassigned to minor league camp.
Posted by The Omnipotent Q at 12:41 PM