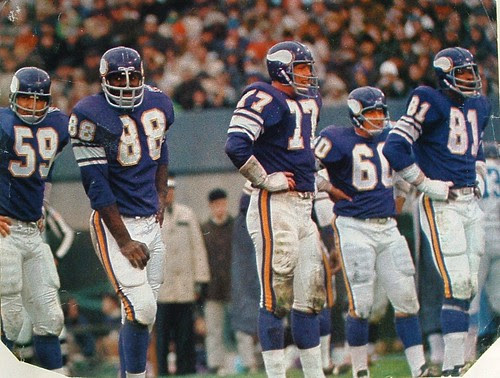 In October 2004, the good folks over at the Sons of Sam Horn message board started a thread called "Win It For," as the Red Sox were closing in on the first World Series championship in 86 years. Fans named everyone from former Red Sox players to their dead grandfathers as to who they'd like to see the Red Sox win that championship for. It even spawned a successful book.

Well, in that vein, I have my own list of "Win It For" that I'd like to see the Minnesota Vikings get in their first Super Bowl since January 1977 get there for.

Win It For:
The Twin Cities. Mary Tyler Moore. Prince. Every Vikings fan who suffered those mediocre teams of the last three decades, and the ones who just missed winning it all, and who longs to see their beloved boys in purple and gold win a Super Bowl before they die.

Win it for all of us. The time is now.

Just win it. Get us to Miami.
Posted by The Omnipotent Q at 1:10 AM

Today is a tough day for me.

For starters, I'm not really die hard into football. If I was, I should be a Cowboys fan as I was one when I was younger...but I lost interest after Waters and Staubach left and thugs came up.

But this year with The Saints doing so well...(an ex bf is an avid fan) I was excited to see the possibility for them being 'there'.

But then watching all the hoopla and debates on Favre, I followed the last couple of seasons the trash talk about him and really became a 'rooter' for him. He's doing what he loves(it's obvious) and getting paid. So what it's not for the team that he spent so many years with. If another company came up and offered me double...doing what I do and still keep my integrity....I'd do it.

So today...I'm conflicted as I'd like to see the Saints make it...but I'd love to see Favre be there in the end...THEN retire for good.

But alas, I can't have my cake and eat it too.

If the Saints were playing almost anyone else, I'd be pulling for them. I know most of the nation wants to see them win.

But I am a diehard Vikings fan, and want to see them win just one Super Bowl before I die.

So sorry Q. It is a shame that someone had to lose. It was a great game and so sad to see you once against in the dumps.