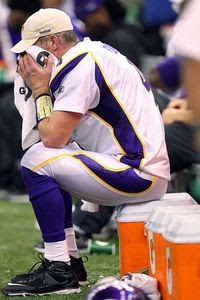 Brett Favre told ESPN's Ed Werder after the game on Sunday that his return to the Vikings for the 2010 season was "highly unlikely." Favre said he would talk to his family this week and make his decision shortly.

Favre's a warrior, and I appreciate the way he went out there despite all the hits he took, clean or not, by the Saints. But he is a football player, and he's got one more year left on the contract he signed with the Vikings.

He'll be back for one more year. Count on it.

I'm sure we'll be hearing from Favre what this guy once said so famously:

Posted by The Omnipotent Q at 3:48 PM

They had a great season that came down to overtime. I know you love 'em. Next year. Pete

Still hurts, Peter. The loss takes me back to the night of Game 7 of the 2003 ALCS. The baseball season can't come soon enough.