Know Your Seinfeld Lines on Tuesday 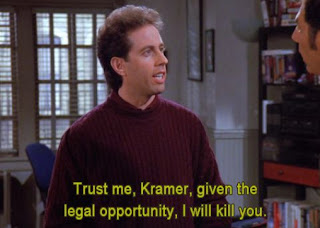 Trivia will be happening this Tuesday night, April 23rd at 8:30 PM, with "France Trivia" as the Special Category. It will be seven questions connected to that great European country in history and pop culture. The Q Train lightning round will be "Seinfeld Quotes Trivia." I will give you ten funny quotes from the classic comedy series from the 1990s, and you have to tell which of the four main characters (Jerry, Elaine, Kramer or George) made it. It will be just those four characters and none of the supporting ones.


The Sneak Peek question for this week is:
"Who was the original host of the US version of 'Who Wants to be a Millionaire' in 1999?"

The Bruins won their Game 6 matchup with the Maple Leafs on Sunday, so there will be a Game 7 on Tuesday night in Boston. That means we go upstairs in the Loft for Trivia this week. The Bruins game starts at 7 PM, so the bar will be crowded when Trivia will begin, so it might be wise to get in early as well. Seating will be limited upstairs in the Loft. Looking forward to seeing many of you this Tuesday for Trivia!