Rob Neyer is a well-known name around the world of baseball writing, and has been for over 20 years. He's worked for ESPN, Fox Sports and the legendary Bill James. He has written six previous books on the world of baseball, but his seventh takes what was essentially a meaningless game between the Houston Astros and the Oakland A's in September of 2017 and discusses baseball along all different facets of the game, both on and off the field. It's called "Power Ball: Anatomy of a Modern Baseball Game" (HarperCollins Publishers). 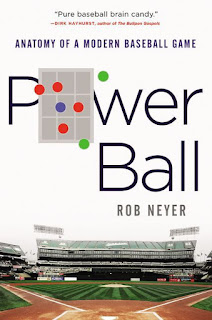 Neyer has been at the forefront of the sabermetrics revolution from the beginning, and if you are one of his disciples, you certainly won't be disappointed by his book.  However, this shouldn't turn off those who feel that sabermetrics is "ruining the baseball experience." Neyer uses what was a come-from-behind 9-8 win by the A's to explain how we got where we are in MLB in 2018, even naming the titles of each chapter starting with the "Visitors First" and ending with the "Home Ninth."

Neyer has always courted controversy with his opinions, and his employers at ESPN once suspended him for his outspokeness. And he goes through the minefield of subjects like race and sexual orientation in this book, and isn't shy about those subjects in relation to baseball. But he hits just about every subject in baseball in regard to the newer on the field issues, everything from the explosion of the shift (and how it was around along before Ted Williams came along), the subject of lousy teams "tanking", and the new phenomenon of "launch angles" (I'm still lost on that subject.

In reading the book, you feel as if you are sitting in the stands at the Oakland Coliseum enjoying a game while you and Neyer are having a beer and talking baseball. He has a breezy syle, and every "half-inning" leads to a new subject regarding the game we love. Neyer hits everything from juiced balls, pitch framing, to Jose Altuve's height (or lack of it).

"Power Ball: Anatomy of a Modern Baseball Game" is an enjoyable read from one of America's best baseball writers and minds. It wasn't a memorable game in the long run, but Rob Neyer made it so.
Posted by The Omnipotent Q at 11:32 AM