A 2004 Red Sox Moment In Minnesota 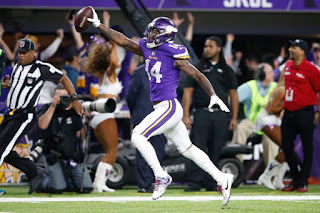 As many of you may know, I have been a fan of the Minnesota Vikings for quite a long time. I go back to 1972 with them, when Fran Tarkenton was traded back to the Vikings by the Giants. The Giants were awful back then, and I "followed" Fran back to his old team, and I really got to like the Vikings, with their Purple People Eaters and dominance in brutally cold weather. I became a fan, and have stuck with them ever since, through the Super Bowl losses, mediocre teams, and other near misses from years such as 1998 and 2009.

I've actually been a Vikings fan 5 years longer than I've been a Red Sox fan. (I hooked up with these long-suffering franchises when I was just a youth. Little did I know the misery I was in for going forward.) I was absolutely thrilled when the Red Sox reached the Promised Land in 2004, with the greatest comeback in history and the first title in 86 years. But I remember saying to my friends that night, "Now if only the Vikings can one day win a Super Bowl..."

It's been an amazing season for the Vikings in 2017. They lost two key players early in the year in QB Sam Bradford and rookie RB Dalvin Cook. I thought each injury would derail any chance the Vikings had, but their amazing defense, ranked number one overall in the NFL, has kept the dream going, not to mention the incredible play of QB Case Keenum and RB Latavius Murray. They stepped in, and the team didn't miss a beat, winning eight straight at one point.

As the second round of the playoffs was about to begin, and the Vikings would face the New Orleans Saints, I couldn't help think of the 2004 Red Sox. Both the Red Sox and Vikings fan bases have been through absolutely interminable long stretches of waiting and hoping to see their teams win it all. I thought more and more about the ecstasy of the Red Sox 2004 World Series win, and how I want to relive that feeling again, this time with the football team I have supported for 46 years. I even got slightly emotional at the thought this might finally be the Vikings year. I just wanted to see happen now. Just ONCE.

The way Sunday's game finished, they sure could be.

It was a crazy game. The Vikings dominated the first half, taking a 17-0 lead at halftime, playing an almost perfect half of football (except missing a field goal at the end of the half). I started thinking that it was coming too easy, and that the Saints aren't as bad as they way they played the first half.

And they came back. New Orleans scored a TC at the end of the third quarter, scored another early in the fourth, and blocked a Vikings punt and later converted that into another TD, and grabbed a 21-20 lead. But they left too much time on the clock, and Keenum drove the Vikings down to the Saints 35, where Kai Forbath kicked a 53-yard FG to put the Vikings out front again.

But they left too much time on the clock, too. New Orleans drove down the field, and Mike Lutz' 43-yard FG seemed to give New Orleans a 24-23 win. But there was still 25 seconds to play...

At that point, I sank in my chair at home, thinking the season for the Vikings was over. I was going over in my head the reaction to this loss, how the Vikings were "chokers" again, giving up a 17-point lead, and this would be another in the litany of painful Vikings losses. I was even thinking how I'd react to this on Facebook, and what should I change my FB profile picture to?

I half-heartedly watched the final seconds, and it looked like the Vikings were going down without a fight. They got to their own 31 with 10 seconds left, and I had the TV on mute, as I didn't want to hear it.

Then Keenum finds Stefon Diggs at the Vikings' 35 yard-line, and nobody touches him, and he's running down the sidelines with no one behind him. Am I really seeing this??? I grabbed my TV remote and turned the sound back on, and Joe Buck was screaming about the Vikings winning! I fell to my knees in front on my TV and just started laughing and yelling "I can't believe this just happened!!" over and over again.

I replayed the score, and recorded for my friends on FB. My iPhone exploded with friends and family congratulating me on the win. It was the greatest moment in Minnesota Vikings history, and now they head to Philadelphia on Sunday to play the Eagles for the right to play in the Super Bowl, on their own home turf.

The game put a smile on my face that stayed there the rest of the night, and is still there. And I couldn't help think of the 2004 Red Sox again on Sunday night, and experienced the joy I felt when the Red Sox came back from a 3-0 deficit against New York to get to the World Series. This time it was with the Minnesota Vikings. They pulled a rabbit out of the hat like the Red Sox did back then, and gave the fans a moment we'll always treasure.

It was a gift to all their long-suffering fans, and now we will see if they can parlay this absolutely unbelievable moment into their first Super Bowl title ever. Like the Red Sox winning the 2004 AL pennant, the Vikings still have lots of work to do before they can claim the ultimate victory.

But Stefon Diggs' TD on Sunday will go down in NFL playoff lore, no matter what happens from here on in. Thank you, Vikings, and now let's go get the Lombardi Trophy.

Just once before I die!
Posted by The Omnipotent Q at 11:43 AM