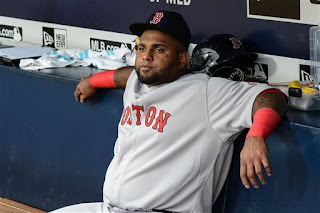 I haven't written about the Red Sox in a long while (and it's time to start writing more about them at this blog), but this is as good a time as any to do so.

The Pablo Sandoval Era came to a merciful end on Friday, as the Red Sox finally admitted their mistake in signing him and designated him for assignment today. They now have 10 days to do something with him, either trade him, release him, or if he clears waivers, keep him at AAA. His release looks like the most viable option, as he has absolutely no future whatsoever in the Red Sox organization.

It looked promising this past spring, as Sandoval showed up to camp in much better shape, and led the Sox in RBIs in the spring games. His play in the field wasn't bad, so there was reason to hope he was on to a possible comeback season. The Sox traded away Travis Shaw to Milwaukee with idea that third base was Sandoval's position to lose.

And from the get-go, it all fell apart. Sandoval hit just .212 in 35 games, with 4 HRs and 12 RBIs. He wound up on the disabled list twice, and it was apparent the end was coming for him now. Third base became a black hole for the Red Sox, but the emergence of Deven Marrero and Tzu-Wei Lin both filling in ably there made the decision to cut ties with Sandoval a bit easier. He is still owed over $48 million on a contract that runs until the end of 2019.

In my opinion, this is the worst free agent contract the Sox have ever given out. Many may argue that Carl Crawford's odious seven-year deal the Sox gave him in 2011 was worse, but Crawford's numbers were actually decent, and the Red Sox were able to dump the majority of the money and years on his deal to the Dodgers in the famous trade that opened a ton of salary relief that the Sox wisely turned into the 2013 World Series championship. So Crawford's deal actually had a silver lining to it.

The Sox have to eat the remainder of this deal. No one in their right minds will swing a trade for him, or bring him in to play in 2017. The only route I can see Sandoval going now is to Japan to revive his career. There's no silver lining that I can see coming out of the Sandoval signing, now or in the future.

The Red Sox made a big mistake signing Sandoval, and will pay dearly for him to either play on another team or to sit home. Some times you just have to admit the mistake and move on.

Sandoval leaving may very well mean that we will be seeing much-heralded rookie 3B Rafael Devers in the near future. He was putting up big numbers at AA Portland (.300 AVG, with 18 HRs in 77 games) and was just promoted today to Pawtucket.

Devers is the future, Sandoval is the past. Time to look ahead, and forget this ill-conceived signing ever happened.
Posted by The Omnipotent Q at 3:47 PM